Homolka is a student, and Erickson and Koelsh are professors, all at the University of Nebraska, Lincoln

A look at open lots

Defining the characteristics of manure and runoff from open, earthen lots creates unique challenges compared to animals housed under a roof. Some variables include:

• Distinguishing between compacted soil and manure

• Management practices (such as frequency of manure collection)

• Diets fed due to the ability of ruminant animals to utilize a variety of by-products, forages, and crop residues

To quantify the differences of open lot systems, data was collected from cattle finishing trials conducted at the Eastern Nebraska Research and Extension Center (ENREC) beef feedlot facility. Over a 15-year period, 416 unique pen observations were evaluated for the impacts of a broad range of weather conditions, dietary treatments, feedlot management practices, and nitrogen and phosphorous conservation practices (for animal performance data, see the 2021 Nebraska Beef Report). A pooled analysis of manure and nutrient characteristics from the pen data was performed.

Standard methods were followed for harvesting manure and determining mass. Representative samples were collected and frozen at minus 4°C until analysis. When rainfall occurred, runoff was collected, sampled, and quantified.

Nitrogen entering a pen as feed will exit the pen in one of four ways: in the marketed animal (retained); as runoff holding pond water; as removed manure; or as N loss, occurring predominantly as ammonia volatilization (Figure 1). The evaluation of the independent pen measurements at ENREC suggests that N retained by the marketed animal (approximately 13% of N in feed) are consistent between winter and summer feeding periods. On the other hand, nitrogen retained in the manure and runoff and the amount that is lost is significantly different for winter and summer periods. 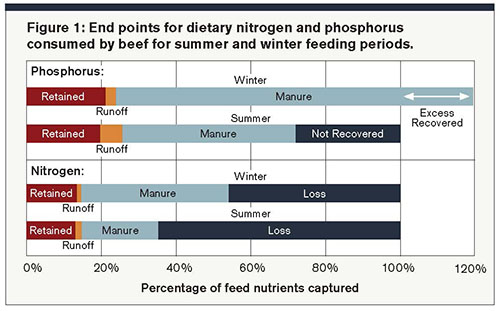 Intake provides some explanation for observed variability of as-removed manure N and N loss for manure harvested following a summer feeding period, but it offers less explanation for the winter feeding period. (See the 2021 Nebraska Beef Report for a summary of statistically significant variables.)The data set suggests that an increase of dietary intake of 1 pound results in approximately a 0.30-pound bump in as-removed manure N during the summer. There was no relationship during the winter.

The correlation between organic matter and N in the manure (Table 1) suggests a strong relationship (R2 = 0.85 for summer and 0.70 for winter, P < 0.01 for both). Improving manure’s organic matter also appears to reduce N losses. Management practices that elevate manure organic matter will impact planning for as-removed manure N and may moderately reduce N emissions as well.

Phosphorus entering a feedlot pen as feed will exit the pen in the marketed animal (retained), as runoff holding pond water, or as manure (Figure 1). Again, the fraction of P retained by the animal remained relatively constant for summer and winter periods.

The as-removed manure P was substantially greater in the winter than summer, exceeding the winter estimate of excreted P. The manure P for summer and winter represented 47% and 95% of fed P, respectively. The runoff P during the summer was double that observed during the winter feeding period (6% versus 3% of fed P).

These results suggest that a P balance based upon these four inputs and outputs left some P unaccounted, approximately 0.02 pound per head per day in the summer (likely left on the lot surface or mixed in the soil) and minus 0.01 pound per head per day in the winter. Pen cleaning practices in fall following a summer feeding period (lot surfaces are drier and the soil-manure interface is more easily maintained) resulted in some excreted P not being removed from the pens.

Spring pen cleaning following the winter feeding period more likely involves muddy conditions (and less easily defined soil-manure interface) with more soil and additional P being removed beyond what is excreted. Differences in ash content appear to support this conclusion. These findings suggest that pen cleaning following the winter feeding period was removing P left behind during the cleaning at the end of summer. 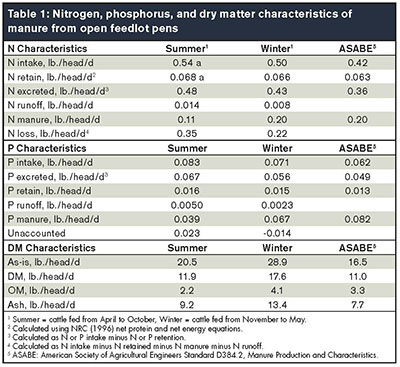 These observations of variation in manure solid characteristics between the winter and summer feeding period (and similar previous observations for N and P) suggest the need for characterizing and managing manure independently based upon the feeding period. Differences at the ENREC feedlot are due, in part, to a summer feeding period, which included higher N and P feed intake, a shorter feeding period, and larger animals entering the lot. Differences in weather conditions and pen surface conditions are likely important contributors to variability, commonly impacting the amount of soil contamination that occurs.

Compared to the standards

As animal performance, feeding program options, and other management practices evolve, standard methods for predicting feedlot manure characteristics and quantities are prone to greater errors. When ASABE assumptions and estimates are compared with field measures in this study, the following observations were made:

In addition, ammonia volatilization from open lots is substantial. For every 1,000 head finished at the ENREC feedlot, the nitrogen loss is approximately 46,000 pounds and 38,000 pounds of N for the summer and winter feeding periods, respectively. This loss is an environmental risk and represents an annual economic loss of roughly $35,000 per 1,000 head for the ENREC feedlot. Experience would suggest that by doubling organic matter in the manure, one might expect to retain approximately two-thirds more nitrogen in the manure.

Standard values for estimating excreted and as-removed manure have historically been used for many planning and design procedures, including the development of nutrient management plans. These standard values have little to no validity in earthen, open-lot animal housing based upon these observations for the ENREC feedlot.

In commercial yards that harvest manure following each feeding period (or possibly more often), separately monitoring and managing manure for unique feeding periods is important. Base nutrient planning processes on manure sampling protocols that establish a history of feedlot-specific manure characteristics, including separate histories for manure removed following winter and summer feeding periods. Due to the high degree of variability in manure characteristics, individual year adjustments for manure and fertilizer rates are essential and should be based upon a current manure sample analysis.

Financial support for this research came from the Robert and Karla Baltzell Student Innovation Award at the University of Nebraska-Lincoln. This information was originally published in the 2021 Nebraska Beef Cattle Report

This article appeared in the May 2021 issue of Journal of Nutrient Management on pages 19-21.

The fuss over phosphorus Next