Packaging phosphorus for the future

Recent developments in the manure phosphorus extraction (MAPHEX) system bring it one step closer to on-farm use. 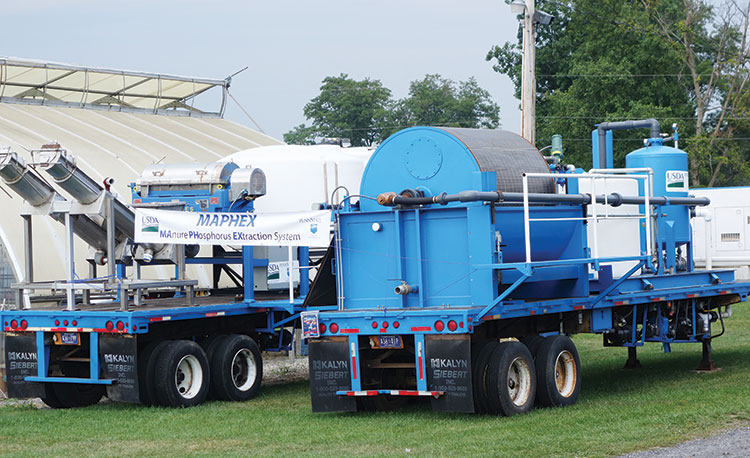 The MAPHREX System uses a four-step process to remove nearly all of the phosphorus from a wide range of manure types.

Dairy and swine manure is typically in slurry form and contains nutrients and organic material that are beneficial to crops. Unfortunately, the concentration of nutrients in dairy manure is too low to make transportation of bulk manure over large distances economically viable.

For this reason, dairy manure tends to be applied to fields near where it is generated, and over time, soil phosphorus (P) concentrations often become in excess of crop demands. Furthermore, because P runoff from agricultural operations plays an important part in eutrophication and removal of oxygen from water in streams and other water bodies, farmers face mounting pressure and regulation to not apply manure to those soils.

A manure phosphorus extraction system, named the MAPHEX System, was jointly developed by USDA-ARS and Penn State University. It was designed to be a solution for the P overloading that happens when unnecessary P is added to agricultural soils. It is scalable such that it can be used as a mobile system, and it has shown high versatility in treating dairy manure from farms that vary widely in herd size, bedding type used, and methods of manure treatment and handling.

The system is capable of removing greater than 90% of the P from dairy manure but at a cost of about 6.25 cents per gallon. Cost is clearly a roadblock to widespread adoption of the MAPHEX System, so a major part of our recent efforts has been to reduce these costs.

Stage A — Liquid/solid separation is done using an auger or screw press to remove solids larger than 1 mm.

By combining the following three measures, we have demonstrated significantly lower treatment costs of just less than 1 cent per gallon of manure treated:

1. Using lower cost chemicals as alternatives to ferric sulfate. A series of experiments were conducted to show that the MAPHEX System could use many different chemical treatments to remove phosphorus from dairy manure. In all cases, greater than 90% P removal efficiency was achievable.

2. A method for the diatomaceous earth to be regenerated and reused. We employed an ashing procedure to recover the DE for re-use as filtration media on the AutoVac. We found that DE could be reused up to three times by simple ashing without appreciable reduction in flow rate. We further found that once the flow rate fell to 75% of the original flow rate, the DE could be regenerated to an original flow rate with simple acid washing.

3. An alternative for the final separation step. We found that if the effluent from the decanter centrifuge, which operates at about 2,500 times gravity, was directed to a disc-stack centrifuge, which operates at about 12,000 times gravity, the resulting effluent was 75% P-free compared to the original raw manure. This is a sufficient P reduction level for most farms. Furthermore, directing the fluid reject from the disc stack centrifuge to the AutoVac resulted in a stackable solid.

Would the system also work on swine operations? A pilot-scale study showed that the MAPHEX System can remove greater than 96% of the phosphorus in swine manures. It strongly suggests that, once scaled up, the essentially P-free effluent could be beneficially used for fertigation (the injection of fertilizers, soil and water, amendments, and other products into an irrigation system) without further loading the receiving soils with P. This scaling up has the potential to reduce storage volumes to mitigate overflow problems during large storms. 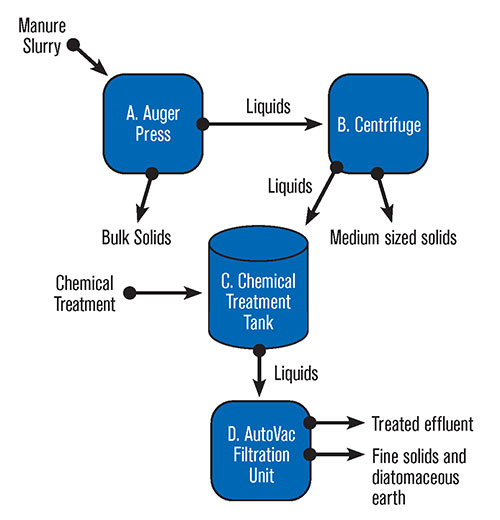 The MAPHEX System is capable of removing greater than 95% of the phosphorus from a wide range of manure types while retaining greater than 90% of N in the effluent for the beneficial use by the farmer. This resulting effluent could be immediately used for fertigation, as most of the negative aspects of raw manure (including P and solids content) have been reduced. Since most of the solids (and all solids greater than 1 µm) are removed, the effluent from the system could be applied as irrigation through a sprinkler system.

The solids removed by the stages of the MAPHEX System also have beneficial uses. Bulk solids (typically about 80% of total solids) removed by the screw press have been shown to contain relatively low amounts of P (9% to 17% of total P) and are often valuable for farmers to use as composted bedding material.

The AutoVac solids (about 10% of total manure solids) contain considerably higher amounts of P (40% to 50% of total P) and are combined with the DE filtrate material. The best use for them is to be ashed in order to regenerate and reuse the DE.

The centrifuge solids also comprise about 10% of total solids and contain higher amounts of P (40% to 50% of total P). These high-P solids also have multiple potential end users.

For dairy farmers, concentrating manure P into a more compact form cuts their fuel costs considerably, allowing them to economically transport P to fields farther from the dairy that need it. This allows the much greater volume of liquid effluent to be applied to fields close to the dairy that, over the course of time, have come to have higher levels of P but still need N. This option does not remove P from the watershed, but it does result in improved P allocation for crop use.

The solids could also be useful for energy generation. Once centrifuge solids are dried to about 30% moisture, they make an ideal feedstock material. This option also concentrates the phosphorus into a very dense form (residual ash) that can serve as a compact form of phosphorus and trace element fertilizer.

A simplified unit that could handle 125,000 gallons per day and remove 50% to 60% of P from manure is currently in the engineering phase. The future goal is to obtain license patents for these two systems so they can be built commercially and be available for farms to use.

This article appeared in the February 2021 issue of Journal of Nutrient Management on pages 14 and 15. Not a subscriber? Click to get the print magazine.

Steer clear of danger Next