For one Midwest dairy, partnerships with private companies allowed them to successfully run an anaerobic digester on their farm for most of the last decade 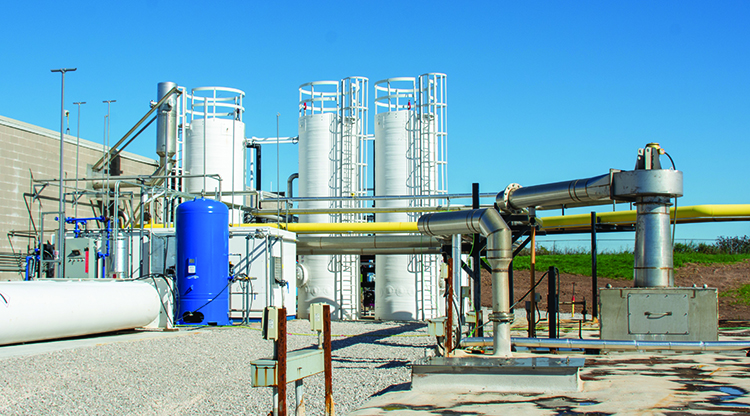 For several years, Nick Dallmann was interested in adding an anaerobic digester to his family’s dairy farm. “I knew some other people who had one, and I saw the benefits from having a digester,” he explained. Still, they weren’t sure they wanted to undertake the capital required to build one on their dairy.

After some conversations with Steve Dvorak, a physical engineer and president of DVO Inc., Dvorak decided to build a digester at Dallmann East River Dairy LLC to utilize the manure produced and use it as a research facility. At the same time, the family added a freestall barn and expanded their herd size to maximize their parlor. 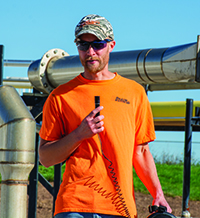 Nick Dallmann, who farms with his family at Dallmann East River Dairy LLC, spoke about their anaerobic digester and manure management practices at a Between the Lakes Demonstration Farms Network field day held near Brillion, Wis.

Dallmann farms in Brillion, Wis., with his grandparents, Terry and Darlene; parents, Daniel and Shirley; and his sister and brother-in-law, Travis and Lindsay Hansen. They milk 2,900 cows and farm around 3,300 acres of cropland. He spoke about their farm and digester during a Between the Lakes Demonstration Farms Network field day.

The plug flow digester, which began operating in 2012, was designed by DVO, who also operated the digester and sold the electricity to Wisconsin Public Service. The Dallmanns had a 10-year contract with DVO, but with markets changing on the electrical and utility side, Dallmann said they knew the original agreement wasn’t likely to last the full decade.

Initially, a combustion engine was used to make electricity from the methane that is produced, but that changed when DVO sold the digester to U.S. Gain, who now owns the digester and gas cleanup equipment. DVO continues to do maintenance on the digester.

Their manure is now being turned into natural compressed gas that is injected into a pipeline. Dallmann explained that raw biogas only contains 60% methane, and it has to be 99% methane to be injected into the pipeline.

“One big challenge with compressed natural gas projects is getting impurities out of biogas,” Dallmann said. Before, they were able to put the biogas through the combustion engine as it was. Now, once the biogas leaves the digester, it goes through more equipment to remove the hydrogen sulfide, carbon dioxide, and other impurities.

Every day, Dallmann said their dairy is producing 1,200 gallons of diesel equivalents. The natural gas is compressed and stored in a trailer, and every three days that trailer is hauled to another dairy about 20 minutes away where the gas is injected into the pipeline.

Bedding is a major benefit

With a capacity of 1.5 million gallons, manure enters the digester on one side and makes a big “U.” As new manure comes in, digested manure is pushed out.

The anaerobic digester must stay at 101°F year round. “That’s where the bugs operate most efficiently,” he said. Its location in the ground provides natural insulation, and then it is covered with spray foam insulation.

The digester is 16 feet deep, with 14 feet of manure and 2 feet of gas storage. Manure is retained in the digester for 16 to 18 days before being released out the other end. Dallmann explained that retention time is critical to fully complete the digestion process.

From there, some of the manure is sent through a screw press separator so that the solids can be removed and used for bedding. The Dallmanns also sell this bedding to two other farms.

“The solids have been a major benefit for us and a major cost savings, and the other two farms enjoy it, too,” Dallmann said. “It prevents us from buying sand, and it makes manure handling and manure storage cleanouts easier.”

In the past, they had been using wheat straw and mattresses. Since switching to the manure solids, they have been able to maintain the same herd somatic cell count.

“As long as the digester is operating the way it is supposed to, we are getting the retention time in the digester we need, and the bugs are working the way they are supposed to, ideally you should have clean solids at the end,” Dallmann shared. Occasionally, they send in samples of solids coming out of the separator to be cultured to ensure everything is being digested properly.

They also run their screw presses as tight as they can, Dallmann noted, to create a drier product at the end. He said the solids used for bedding have 60% to 65% moisture content.

They only separate the solids they need; the rest bypass the separators and go into the manure storage pit, eliminating the need for another waste stream. “We like to keep things as simple as possible,” Dallmann said.

While the digester allows them to recycle manure on their farm, the Dallmanns also reuse water, too. They divert most of the “clean” water collected from roof tops into a ditch that wraps around the farm to keep it out of their manure storage structure.

Meanwhile, “dirty” water from their bunkers, feeding area, and outdoor cattle lot is directed toward an 8 million-gallon storage pit. It was originally built with a 4 million-gallon capacity, but they doubled it two years later. “That gives you an idea of how much water we are collecting,” Dallmann said. 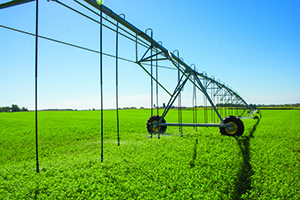 Water runoff from the bunkers, feeding areas, and open lots is collected and then travels through a pipeline system to be land applied using irrigation pivots

This water is utilized through their irrigation pivots when needed. The year before last, when more than 40 inches of rain fell, they only turned on the pivot once. The rest of the water was irrigated on top of fourth-crop alfalfa. In 2020, he said they were able to use the system more frequently as it was intended.

Dallmann estimated that the pivot system paid for itself in two or three years. He said the pivots aren’t all that expensive; there is more cost involved in getting the liquid out to the pivots through a buried pipeline system.

The farm also has 3 miles of buried pipeline used for manure application, which Dallmann considers a positive aspect of their manure management. The pipeline takes the manure under a river, preventing up to 1,500 truckloads of manure from traveling over a local bridge each year. It also reduces soil compaction in the fields.

“This is a major, major benefit for us and our neighbors,” Dallmann said. “Last fall, we didn’t run a single manure truck. It was all applied using draglines.”

When manure is surface applied, odor can be a concern. However, Dallmann feels the digested manure creates less of a smell problem.

“It’s a totally different odor, in my opinion,” he said. “It’s not nearly as potent as raw manure.”

Dallmann also believes the digestion process makes the nutrients more available for the crops. “It changes the manure nutrients from organic to inorganic, and they are ready to be absorbed,” he explained.

While they are not receiving income from the biogas generated on their farm, Dallmann feels there are many other positive impacts from having an anaerobic digester. In addition to the agronomic benefits, he again pointed to the ability to use recycled solids as bedding.

“Using solids for bedding is a major cost saver for us, and selling some to other farms generates income,” he said.

Dallmann is pleased with the partnerships with DVO and U.S. Gain that have allowed them to operate a digester on their dairy for nearly a decade. They are able to capture some of the benefits provided by a digester without the capital investment or the challenges that can come with operation. In addition, it allows them to improve overall efficiency of their dairy, from crops to feed and milk to manure.

“The digester is utilizing what the cow did not. We’re making gas from what’s left over,” he said. “We are trying to capture every bit of energy from that feed.”

With the help of an anaerobic digester and other conservation practices, the Dallmanns are able to achieve their goal of recycling as much of their manure and water as possible.

This article appeared in the May 2021 issue of Journal of Nutrient Management on pages 14-16.

The fuss over phosphorus Previous
Also in Nutrient Management
Stay out of trouble
A behind the scenes look at cover crops
Fueling the biogas boom
By Abby Bauer, Editor
A story about sludge
Working in harmony
Words of wisdom
Committed to memory
Low disturbance application opens doors
Time to shine