While a ration is formulated to optimize milk output, we shouldn’t ignore the nutrients excreted in the process.

The author is the founder of DNMCmilk, which works with dairy producers and heifer growers in several regions of the U.S. and around the world. 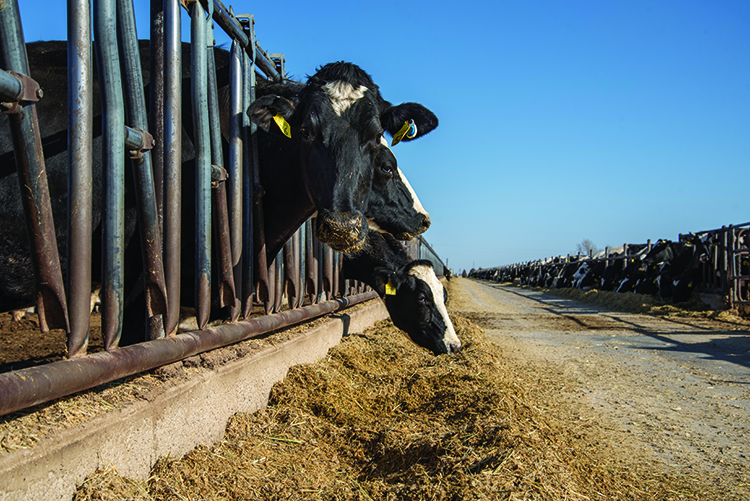 Rations that are formulated more precisely save money and reduce unused nutrients being released through manure.

When considering the task of formulating rations, I think about building blocks. When an architect and a contractor work together to build a house, there is a plan and there are materials. Building dairy rations is much the same. Instead of wood, steel, and concrete, we create dairy rations with ingredients like corn, soybean meal, various by-products, and forages.

In reality, though, the nutrition formulation model I use looks deeper. It is not concerned with the use of soybean meal or canola meal, or corn silage or alfalfa hay. It is, however, very interested in carbon and nitrogen as well as various vitamins and minerals. This is science that has been in development for more than 100 years and is getting more complicated by the day!

Nothing goes to waste

The reason I refer to the building blocks concept is that dairy producers buy these nutrients through feed purchases and crop or forage farming costs. Then they sell these same building blocks, repackaged by the cow in the form of butter, cheese, fluid milk, and beef.

The most amazing part is how the microbial action in the cow’s rumen converts items inedible by humans, like wheat straw, corn stalks, and ethanol by-products, into nutritious human foods. Cows are the ultimate “up-cyclers.”

However, the process is not perfect, nor 100% efficient. For every cheeseburger and milkshake value meal at a fast-food restaurant, there is manure that is also created. We won’t, however, call it waste since the cattle industry is excellent in using this co-product for either methane digesters or crop production fertilizer. Nothing goes to waste! Even the solids left over after creating methane can be an excellent, clean bedding option for the cows. The newest technology is even creating perfectly clean water from the “other” product produced by our cows.

Though most of these manure management ideas and plans come from our engineering friends, the formulating nutritionist has a hand in the beginnings of the process. How much, though, can my efforts to build rations impact the problems or opportunities of the manure-based products?

In the dairy world, I think the nutritionist’s role is a bit different than it is for other livestock species. I won’t say it’s harder, but it is different. The beef or swine nutritionists don’t have the opportunity to have their ration adjustments judged by tomorrow’s production measures. In dairy, it is usually no secret if a ration is deemed a good one or a failure, and the decision could come as soon as a day or two from it being fed.

As we think about so many numbers, including milk to feed economics, cow health and reproduction, forage and grain inventory management, and how much protein and fat is in the milk, is there really room left at the table to think about more things? Do the nutrient management implications of the feeds we formulate — those that are not converted into milk or beef but end up in the manure and the urine — have a role?

I grew into my role as a dairy nutritionist in Stephenville, Texas, in the early 1990s. Among other regions of the country that found themselves at odds with regulators, politicians, and the media, the Central Texas dairy industry had an issue with the city of Waco. I am sure the details can be found online, and the struggles were not unlike those elsewhere, but the impact of this issue for me as a young nutritionist was to not add any supplemental phosphorus (P) to our rations. I remember being told by a client that he was more worried about Waco than he was the question of how the level of P compared to the established requirements for what a cow needed in a diet. “We can’t take the risk” was the directive.

At about the same time that this supplemental P reduction was in motion in Texas, we started feeding more and more by-product ingredients that were actually higher in P than primary grains like corn or traditional forages. The fact that P is not a cheap addition to a ration was helpful since removing routine supplemental levels actually was a feed cost reduction for the dairy.

A win-win, it would seem, except for the politics that overwhelmed the situation. The question about whether it was a human source or a cow source of problematic P in the river was complicated by the various area sewer treatment plants in the same area as the dairy farms. I am not sure how the politics and the science sorted itself out in that situation, but the result for me is that I still rarely include supplemental P in dairy rations.

The extras add up

Phosphorus is only one example of nutrients that can be included into diets at excessive levels and either not help or even potentially hurt cows. It may be excessive protein levels in rations that result in a nitrogen loss into the environment or various trace minerals that are fed at a routine excess just to be sure there is enough for the cow.

A dairy nutritionist is quickly judged by their client based on milk production and cow health. At times, the least-risk position for the nutritionist was to be sure there is enough of everything by adding a little extra of many things. With our current intricate nutrition models and complicated on-farm feeding systems, we now have the ability to feed cows building blocks in a more thoughtful manner.

One of the ways to accomplish this is through more laboratory analysis of feedstuffs to be sure we know what we have and only add supplemental levels of nutrients to meet and not exceed guidelines. Feeding groups of dairy cows by their stage of lactation is another way to not only manage feed costs for the producer but also limit unused nutrients that end up in livestock manure and urine. Taking care to consider all of these implications when building diets is the job of a competent and forward thinking nutritionist.

This article appeared in the August 2021 issue of Journal of Nutrient Management on pages 12 and 13. Not a subscriber? Click to get the print magazine.