Thinking outside the box 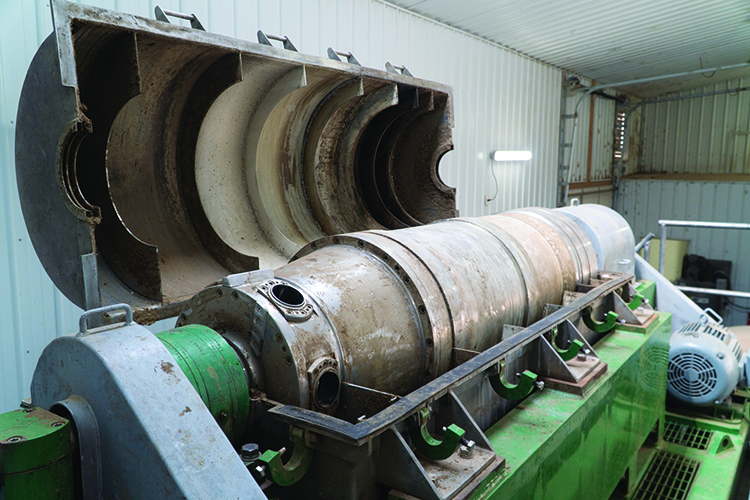 The centrifuge at Swager Farms runs at 250 gallons per minute. The water removed from manure enters the centrifuge to be polished, sorting out the smaller particles missed by the screens.

Dairy farmer Dean Swager isn’t one to just maintain the status quo. “If we can do something better, God gave us an opportunity to learn more and be better in our lives,” he said.

He has applied this philosophy to many aspects of his dairy located in southern Idaho. For instance, to more accurately measure feed ingredients for each load of total mixed ration (TMR), Swager created a system using a conveyor belt, a scale, and a trap door that only allows the exact pounds of forage needed into the mixer.

Recognizing the important role water plays in ruminant digestion, Swager also installed a free-flowing water system that runs along the feedbunks. With more water accessibility, “All cows have an equal opportunity to drink water all day,” Swager said, and he found that cows actually eat less feed and produce more milk now. “Anything to bring efficiency up in a cow is a win-win,” he commented.

He applies this “outside the box” thinking to manure management as well. He shared some of the changes he has made to the farm’s manure handling systems and processes in a virtual farm tour during the Pacific and Mountain West Nutrient Cycling, Soil Health, and Food Safety Conference.

Swager grew up on a dairy farm in southern California that was established by his father in 1945. The family moved their dairy to Buhl, Idaho, in 2000, and over time it has grown to their current size of 4,800 milking cows and 1,000 crop acres. Today, the herd of Holsteins averages around 85 pounds of milk per cow per day.

The operation was set up as a flush dairy, which utilizes water to clean the alleyways. “Nutrient management has always been a big focus of mine because of the flush system,” Swager said. “It was a problem that needed to be solved sooner rather than later.”

He said they have tried a “plethora” of manure handling methods over the years. His takeaway has been that in most instances, simpler is better. “Gravity works every day,” he shared. “It has worked since the beginning of time. You don’t need anything but gravity to take out most of the solids.”

Manure is flushed from the freestall barn alleys down into a receiving pit. A pump moves the manure over some coarse screens for initial solids removal. Then, the manure flows down to another pit, where it is pumped into a third pit that feeds a centrifuge. To remove the smaller particles, Swager installed the centrifuge 4-1/2 years ago.

Running at 250 gallons per minute, the centrifuge polishes the water, taking out the solids that the coarse screens miss. Swager explained that when the solids are spun, they stick to the outside of the barrel, just like wet clothes in a washing machine. The solids travel up an incline inside the centrifuge, getting drier as they move along, eventually leaving the centrifuge dry enough to make a cone pile.

The water removed by the centrifuge is reused to flush the cow lanes, while the solids are composted in windrows and then used for bedding in the freestsall barns. He said the amount of reclaimed solids has doubled since they installed the centrifuge.

Swager said that the system requires little maintenance. The screens are pressure washed once a week and are treated with acid when necessary. The centrifuge is shut down once a week to be greased, but that is about it for regular maintenance.

A bonus of installing the centrifuge has been fewer solids in the manure lagoons. “I hardly ever need to clean my lagoons,” Swager said. “Before, it was a full-time job, cleaning at least one lagoon every year. Now, that’s not necessary with a centrifuge. You could see tire tracks at the bottom of the lagoon from cleaning the year before.”

When asked if he was satisfied with his installation, Swager said, “Absolutely. I think every dairy farm could utilize a centrifuge in some way or another.”

Out to the field

To empty the storage lagoons and move manure to the fields, Swager was looking for a different method than hauling with trucks like he used to do.

“I needed a better way to not go into the lagoon and disturb the bottom with heavy equipment,” he explained. “Also, I needed a way to remove slurry without taking a year worth of drying, even in ideal conditions, to get that slurry dry enough so it could be hauled out.”

About six years ago, Swager settled on a drag hose system for a simple reason. “It’s a tried and true technology that’s been used for many years, more in Eastern states than here, but if it works there, why wouldn’t it work here?” he shared.

Plus, he was able to utilize drag hoses with the system he already had in place. “We just put the pump in and start pumping. There’s no prep involved,” he explained. “And no one is covered in cow manure at the end of the day.”

Another benefit is that the manure is applied more precisely. “It puts the nutrients where you need the nutrients. They are not on the surface; it puts them down below, where it’s plant available,” he explained.

On a good day, he said they are running 1,000 gallons of manure per minute through the injectors, “so we can put a lot of product down in a short amount of time,” he noted.

The draglines are only used for about a month out of the year. He said maintenance includes the basics, such as diesel fuel, oil changes, and filters. As for the drag hoses themselves, he said they usually last about three years before needing to be replaced.

When comparing the cost of the current drag hose system to his former method using tankers and hiring someone to pump out the lagoon, he said he was able to pay off the drag hose system investment in a year and a half to two years.

“It’s just a way better system for putting nutrients on,” he said.

Looking forward, Swager said, “Ultimately, we need to keep the nutrients out of the lagoon. That’s what dairy farms need to do. But for today, this is a great way to mitigate problems.” 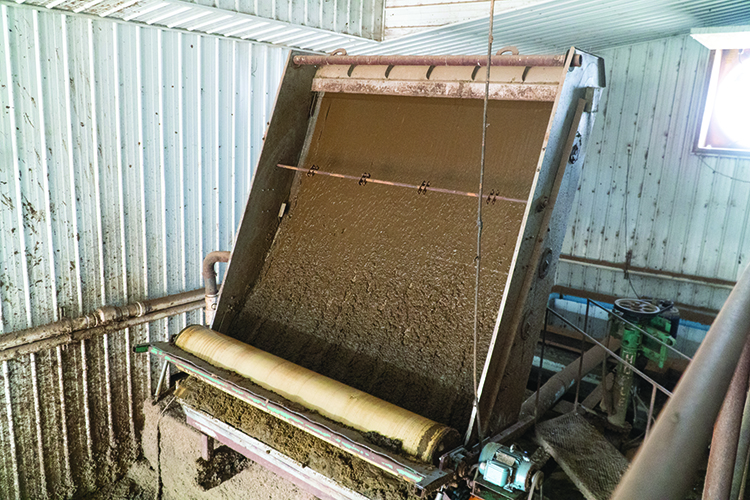 As part of the farm’s nutrient management system, screens remove the solids from manure. These solids are composted in windrows and are then used for bedding in the freestalls.

Better air for all

Swager also worked with the University of Idaho to install a trial zeolite filter on his dairy. Zeolites are minerals of volcanic origin, and one of the most abundant and commercially available zeolites, clinoptilolite, is mined in Idaho. A filter made using this zeolite has the potential to reduce ammonia and other emissions from stored manure.

When approached with the idea, Swager was willing to give it a try. “Systems that can reduce ammonia emissions on the farm would be a great plus to the industry,” he said.

His early opinion about the filter was encouraging. He noticed a drastic reduction in ammonia emissions.

“The zeolite filters are a low-cost option to solving a bigger problem,” he said, noting both reduced emissions and less odor. “I am all about anything positive the dairy industry can do for the environment.”

Swager finds partnerships with the state’s university to be valuable, and he appreciates the work they do. “The University of Idaho does excellent research, and they are always looking for the next step,” he said. “If we simply do the same thing over and over, we can’t expect different results.”

Swager considers himself to have a “why and how come” type of mind. “I like to test why things work the way they do,” he said.

His advice to other farmers was to adopt a similar mentality. “We don’t just have to do things like Dad did because it worked for him,” Swager said. “Ask yourself, ‘Can we do it better?’” Swager doesn’t have a specific plan yet as to what is next for manure management on the dairy, but his eyes and ears are wide open for new ideas that could improve his farm and the world around it.

This article appeared in the August 2021 issue of Journal of Nutrient Management on pages 14,15 and 16. Not a subscriber? Click to get the print magazine.

Account for the nutrients in milk Previous
Also in Nutrient Management
Stay out of trouble
A behind the scenes look at cover crops
Fueling the biogas boom
By Abby Bauer, Editor
A story about sludge
Working in harmony
Words of wisdom
Committed to memory
Low disturbance application opens doors
Time to shine