Composting is an art 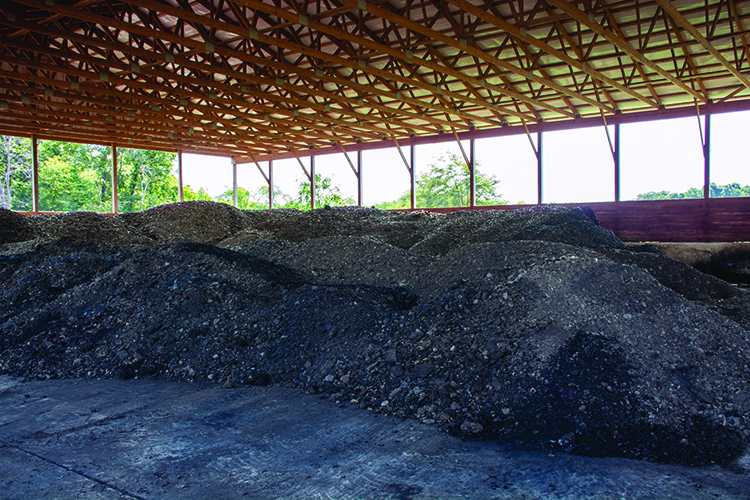 A pile of manure and used bedding goes through three temperature phases as it composts.

Manure composting uses microbes that already exist in manure to break down organic matter such as manure and bedding, and it requires certain conditions to be successful. According to Chryseis Modderman with University of Minnesota Extension, well-managed compost may take four to six months to reach completion, but with diligent aeration and management of the pile, it can reach completion in as little as two months.

The key is that a compost pile must be actively managed. “To be successful with composting, it takes more than simply piling manure and waiting for it to break down,” said Modderman during a University of Minnesota Extension composting workshop.

She explained that basically everything done in compost management is to keep the microbes happy, as they are the ones breaking down the materials. Both acceptable and preferred ranges for several characteristics of a compost pile can be found in the table.

The size of the compost pile depends on the scale and needs of the operation. Modderman said a farm could have one large compost pile or several small ones at different decomposition stages.

At a minimum, a pile should be 3 feet by 3 feet and 3 feet deep. “Anything smaller than that won’t be able to generate the internal heat necessary,” she explained. If you plan to compost during the winter in cold climates, piles should be at least 5 feet by 5 feet and 5 feet deep. The maximum size should not exceed what your machinery can effectively turn and mix.

When building a compost pile, Modderman said you want a smaller particle size, which gives more overall surface area. This means the microbes have better access to degrade these pieces.

If particles are too small, however, they will fit together too closely and limit oxygen in the pile that the microbes depend on. Particles from an eighth of an inch to 2 inches long are best. Manure is crumbly and can be broken down, but coarse bedding such as corn stalks might need to be shredded

In the life cycle of composting, there are three temperature phases. The first is the warm up phase, which Modderman said lasts a few days to a month. This takes place from when the pile is formed to when the internal temperature reaches 105°F.

Next is hot composting, or the thermophilic phase. “This is where real work is done by microbes,” Modderman shared. It can last four to six months. Maintaining the pile between 110°F and 150°F is crucial since the microbes are most productive in this range. “If the pile falls below this temperature range, microbes will become dormant and slow down or completely stop,” she said.

On the flip side, if the pile reaches a temperature over 160°F, microbes will also die off and decomposition will slow down or stop. Turning the pile will lower the overall temperature and keep the composting process going. Once the temperature no longer rises, that is a good sign the second phase is over.

The third phase is the cool curing stage, which can last up to four months. This phase begins when the compost pile returns to lower temperatures, usually below 105°F. At this point, further decomposition by fungi, worms, and other organisms takes place.

Modderman said this step can be skipped and that the compost can be used as a nutrient source directly after hot composting. However, compost that is allowed to cure will be more stable and a more complete product.

Throughout all stages, heat should be monitored with a thermometer probe. The amount of heat in a pile is a good indicator of how the compost is progressing, she said, and temperatures that seem off are usually a sign that something isn’t right.

Another key area is moisture level. “Moisture in compost is crucial for the reactions to break down organic materials,” Modderman said. “It also helps regulate temperature.”

The optimal level is 50% to 60% moisture, but many microbes will still do their job at 40% to 50% moisture. If moisture content is too high, the pore space in the pile will fill up with water, which will limit the oxygen supply.

Modderman said compost breakdown is also hindered if moisture is too low, as the microbes need a moist environment. Composting can occur with as little as 25% moisture, but it will be very slow, and the destruction of weed seeds will be hampered below 35% moisture.

There is a simple way to check if composting manure is in the correct moisture range. While wearing gloves, Modderman said to conduct a “squeeze test” in several areas of the pile. If water drips from compost squeezed in your hand, the compost is too wet. If you open your hand and the compost falls apart, it is too dry. Compost with optimal moisture should hold its shape and feel like a damp, but not wet, washcloth.

If moisture is not in optimum range, there are a few ways to alter it. Covering a compost pile, with a permanent roof or a tarp, gives control of moisture level. Additional aeration and turning can help if a pile is too wet. On the other hand, if compost is too dry, it can be moistened with water.

Compost piles also need the right amount of oxygen, and the need is greatest early on. According to Modderman, a minimum of 5% oxygen in the pile is necessary. Oxygen is most abundant in the outer layers of a pile, and turning and mixing the compost is important to spread oxygen throughout the pile.

Another important component is the carbon-to-nitrogen level, and one can send a sample into a laboratory to determine the ratio. “It’s valuable to know what components are out of balance so you know how to fix them,” Modderman said.

To remedy a low carbon-to-nitrogen value, one can add carbon sources such as straw or wood chips. To fix a high carbon to nitrogen ratio, add nitrogen sources, such as grass clippings or hay.

Modderman reminded the audience that aged manure is not the same as composted manure. Following the guidelines in this article will assure composting has effectively taken place.

This article appeared in the August 2021 issue of Journal of Nutrient Management on pages 22 and 23. Not a subscriber? Click to get the print magazine.