Part of three generations of Holloway employees, Terry celebrated 50 years of service on Dec. 18; He will remain with company as senior advisor

The information below has been supplied by marketers and other industry organizations. It has not been edited, verified or endorsed by the Journal of Nutrient Management. Vard Terry
Holloway President Vard Terry has announced his retirement after 50 years with the company.

Terry, who started at Holloway on Dec. 18, 1971, celebrated his 50th anniversary with the Central California-based company this past December. He officially retired on April 1, 2022.

While Terry will be stepping away from his full-time post, he will continue working with the staff as a senior advisor this year – Holloway’s 90th as a company.

“Holloway wouldn’t be where it is today without the contributions of Vard, and the Terry Family,” said Holloway CEO Brian Maxted. “He represents what Holloway is all about – integrity, trust and experience, building long-term relationships with customers, and putting our people, and our community, first.

“I’m excited for Vard to begin this next chapter of life, but also selfishly thrilled he will remain active as a senior advisor– in what marks our 90th anniversary as a company this coming May,” Maxted added. “We look forward to building on the legacy, experience and relationships Vard forged here at Holloway.”

In his five decades, Terry saw truckloads of changes to Holloway, which has grown from a gypsum mining operation to a multi-faceted company that provides numerous products as well as services to not only the agriculture industry, but the environmental and logistics industries as well. 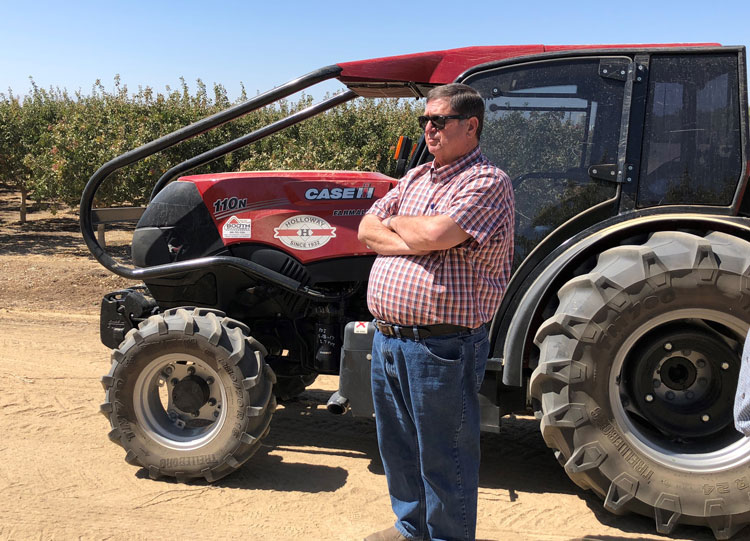 Terry has witnessed Holloway’s Lost Hills Mine evolve from the area’s top-producing gypsum mine to also include a full-circle waste management facility. He has also seen Holloway grow to offer a full line of agronomy, orchard removal and redevelopment services, as the company was recently named Inc. magazine’s fastest growing ag and natural resources company for 2021-22.

“I’ve made so many great relationships and met so many wonderful people during my time with Holloway,” Terry said. “I think that’s what I’ve enjoyed most during my time here, the people. Whether it’s the customers we work with, or our employees in the office, or in the field or at the mine, it feels like a family here.”

For Terry, it literally has been a family operation here at Holloway.

President since 2012, Terry is part of three generations of Terrys who have worked with Holloway – including his father, Vard Sr., brother, Allen, and now his son, Daniel, who is Vice President and Head of Ag Products for the company. The Terrys have combined to work for Holloway for more than 200 years.

“The big thing I’ve learned is to find something you love, and stick with it,” Terry said. “In today’s business, a lot of people get into the habit of thinking the grass is greener somewhere else. But it’s tough to build relationships if you’re jumping around and don’t love what you’re doing every day. It sparks something in you when you love your job, and are able to grow with the company you’re working for – which is what I was able to do for 50 years here at Holloway.”

Holloway will recognize Vard Terry for his 50 years at its 90th anniversary customer appreciation event next month. For a video tribute to Vard Terry’s 50 years, along with a photo gallery from his time with the company, visit HollowAyag.com/ThankYouVard.

About The Holloway Group

Founded in 1932 as H.M. Holloway Inc., a gypsum mine located in Lost Hills, Calif., Holloway has grown into a multi-unit group of privately held, affiliated companies in the agricultural, environmental, mining, and logistics industries.

Headquartered in Bakersfield, Calif., Holloway Agriculture is a full-service, one-stop shop operation, working with growers from planning stages through materials delivery and application, while also assisting with waste collection and other elements of farm management.

Ultimately, Holloway’s goal is to provide its customers with sustainable products and services at an excellent value.