A new pathway to biogas from swine manure

A digester specifically designed for hog farms could open doors to biogas production.

The author is a waste management specialist for Oklahoma Cooperative Extension Service. 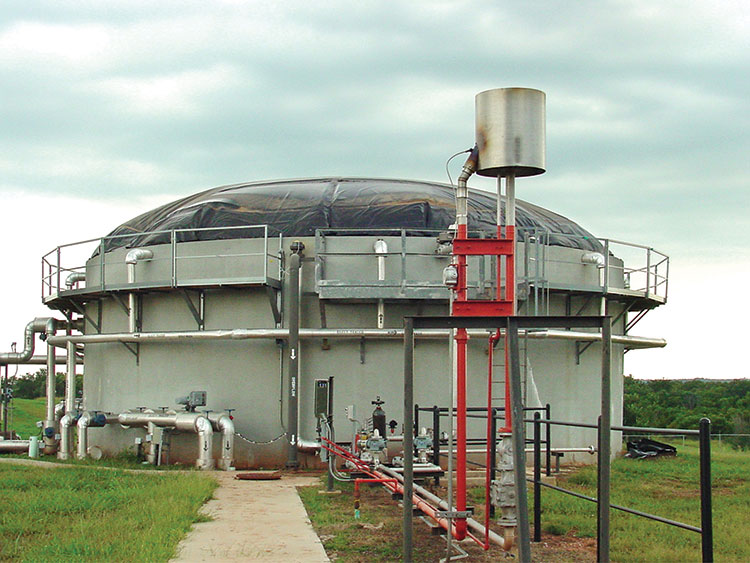 This is the anaerobic digester at the Oklahoma State University Swine Research and Education Center.

When in Wisconsin a number of years ago, I had the opportunity to tour the Dane County Community Digester, which produces biogas (a mixture of high-energy methane and no-energy carbon dioxide) from manure collected from three dairy farms. The manure is mixed with fat and grease from restaurants in nearby Madison. The manure and grease contain enough energy to run a two-megawatt generator.

On the bus ride back to the conference headquarters, I overheard a conversation between two fellow passengers. “That was impressive. Too bad it’s not possible to produce methane from pig manure,” one of them said.

My first impulse was to jump up and shout, “No! No! That’s not true!” But not wanting to prove I was rudely listening in on their conversation, I kept to myself.

My fellow passenger was wrong, of course. Pound for pound, swine manure produces just as much biogas as any other manure, and usually at a higher methane content. What the person should have said was, “Because we handle swine manure as a liquid, its low wet mass methane potential makes it difficult to digest economically.” 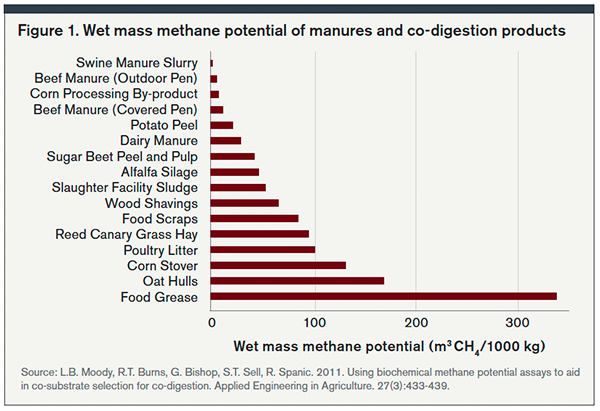 In the southern United States and in the tropics, liquid swine manure is flushed into anaerobic lagoons. A lagoon treats manure by settling the solids, which anaerobic microorganisms convert to biogas, liquid, and phosphorus-rich sludge. Liquid on top of the sludge layer (the effluent) is recycled back to the barns for flushing. Nutrients in effluent are recycled to grow crops.

The lagoon-recycle system works pretty well for the farmer. It is low maintenance, requires hardly any labor, and returns valuable nutrients to the soil.

The problem is, since lagoons are open to the air, all that biogas rises up into the atmosphere. Methane is a potent greenhouse gas. Carbon dioxide, which is usually blamed for climate change, is less potent.

It is no surprise, then, that the most common digester on swine farms is a covered lagoon. The thought is to put an airtight lid on the lagoon and capture all the escaping methane. With the recent renewable natural gas (RNG) boom, there are companies in North Carolina, Utah, and Missouri doing just that — covering swine lagoons, cleaning up biogas, and injecting methane into nearby natural gas pipelines.

There’s nothing wrong with that, of course, but the farther north you go, the less likely it is to produce biogas during the winter. Also, covering lagoons makes it difficult to control lagoon liquid level, recycle flush water to barns, and pump effluent out to fields.

A second route is to pretreat the flushed manure, reducing its organic matter content before it reaches the lagoon. Sending pretreated flush water to the lagoon reduces the organic loading, and it can turn an anaerobic lagoon into an aerobic lagoon. Aerobic lagoons do not emit methane, but we are back to the problem of low wet mass methane potential. Any digester capable of treating flushed swine manure would have to be nearly as big as a lagoon and would be impossible to heat during the winter.

Speeding up the process

Biosystems engineers at Oklahoma State University (OSU) came up with the idea of using an Anaerobic Sequencing Batch Reactor (ASBR) to pretreat swine manure ahead of the lagoon. 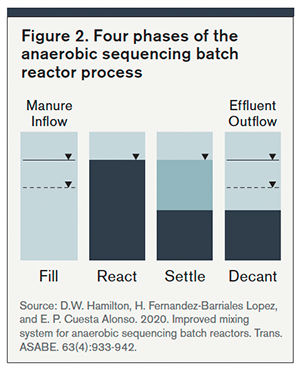 An ASBR digester converts manure to biogas in just a few hours. The digested solids settle in the reactor, and treated effluent is decanted off the top. Good anaerobic microorganisms stay with the settled solids, so once a new flush of manure is mixed in the digester, they start producing biogas right away.

Early research showed that ASBR digesters remove as much as 95% of the organic matter from flushed manure if sludge is periodically removed from the reactor. Nutrients are recycled to crops in dried sludge. Best of all, an ASBR is one-sixth the size of a conventional digester.

We built an ASBR on the OSU Swine Research and Education Center when the farm was moved to its new location. The digester works great at reducing organic matter, and the lagoon is practically odor free. Because of high effluent quality, a Bermudagrass hayfield is irrigated using subsurface drip tubing.

Over time, though, we encountered a few problems. The rising and falling liquid level in an ASBR acts like a piston, so a rigid roof is in danger of being ripped off the top. The geomembrane reactor cover we chose couldn’t stand up to an Oklahoma hailstorm, either. We also found it difficult to maintain a consistent solids content in the reactor.

Undaunted, we went back to the drawing board and came up with a second-generation design (patent pending). The new design has a floating cover to keep constant gas pressure in the digester. The mixing and decanting systems were also upgraded. A small-scale prototype is in testing. More sludge settles in the digester and less solids leave with effluent. Pressure is so low, though, it’s difficult to measure gas production using our old flow meters.

The prototype will soon be built at full-scale. Then, swine farmers will have a new, more efficient option for producing energy and renewable natural gas.

This article appeared in the May 2022 issue of Journal of Nutrient Management on pages 10 & 11. Not a subscriber? Click to get the print magazine.