By Geetika Joshi
The author is a senior environmental scientist with the California Department of Food and Agriculture, Office of Environmental Farming and Innovation. A covered lagoon digester is put to use in Hanford, Calif.

Farmers and ranchers in California know that their Golden State is more than palm trees and beaches. It is the largest dairy producing state in the nation, and based on 2017 data, California housed 1.7 million cows and produced 39.8 billion pounds of milk on 1,331 dairies.

The overwhelming majority of our dairy cows — 91% — live in the Central Valley, while the remaining 9% reside in the northern coast and southern regions. These areas vary significantly in climate, water, and air quality, all of which play a role in on-farm animal and manure management methods. The cooler climates up north are well-suited to pasture-based operations, while larger feedlot-style, flush-based systems prevail in the Central Valley.

California’s large number of cows contribute methane emissions, which result from the action of methanogenic bacteria that thrive in the cows’ guts. Methane from livestock comes from two main sources: enteric fermentation, such as cow belching, and storage of manure in anaerobic (wet) conditions, such as ponds and lagoons.

Methane is a potent greenhouse gas (GHG), and its emissions are responsible for about 20% of the global warming now driving climate change. In California, agriculture accounts for 8% of the total inventoried GHGs, and about 53%of that is from animal agriculture. Enteric fermentation contributes to 28% of our agricultural methane emissions, while 25% stems from manure storage.

State legislation passed in 2016, SB 1383, requires California’s dairy and livestock sector to reduce its methane emissions to 40% below 2013 levels by 2030. The statute requires the California Air Resources Board (CARB), in consultation with the California Department of Food and Agriculture (CDFA), to potentially adopt regulations beginning in 2024 to reduce methane from dairy and livestock manure management operations. SB 1383 also requires CARB to work with a broad range of stakeholders to identify and address challenges and barriers to the development of dairy methane emissions reduction projects.

While reducing enteric fermentation methane emissions remains a challenge that needs additional research and development, methods of manure management are well-researched and commercially available. One such method is establishment of anaerobic digesters to capture the methane produced from stored manure, which can then be used to generate renewable energy. There are also several nondigester technologies and practices that focus on eliminating wet storage conditions of manure to realize methane emissions reduction. 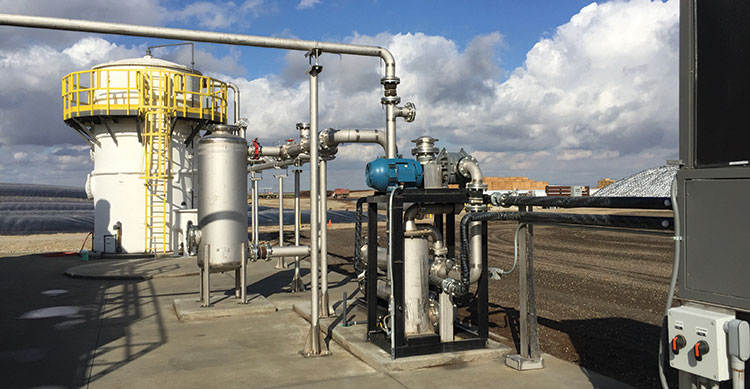 This biogas cleanup and electricity generation equipment was installed in Bakersfield, Calif.

DDRDP was first developed and implemented in 2014-15 with an initial appropriation of $12 million. In its first year, the program funded six dairy digester projects in the Central Valley, where the captured methane was used to make renewable electricity. DDRDP to date has awarded approximately $181.6 million to implement 107 projects located on individual dairies throughout California. These projects generate renewable compressed natural gas (RCNG) fuel in addition to renewable electricity-generating projects. Thirteen dairy digester projects are now complete, and the remainder are in various phases of completion.

Funded dairy digester projects are located across seven counties in the Central Valley, and collectively they reduce approximately 2 million metric tons of carbon dioxide equivalents (MMTCO2e) annually, which equates to 420,000 cars being taken off the road each year.

AMMP was first developed and implemented in 2016-17 in response to stakeholder interest in non-digester management practices. The need for large amounts of digester feedstock, a 50% financial match, proximity to natural gas pipelines, and ease of connection to existing electric grids are some of the key factors attributed to successful digester projects. Subsequently, smaller or more remotely located dairy operations needed a menu of additional options to participate in California’s methane reduction efforts.

AMMP has funded 106 projects totaling $61.9 million. Of these, 28 projects are complete, and the remainder are in various phases of completion. Funded projects are located across 12 counties and collectively reduce approximately 200,000 metric tons of CO2e annually. This is equivalent to more than 42,000 cars being taken off the road each year.

In 2019, CDFA also funded three demonstration projects, totaling almost $2 million. The aim of these projects is to showcase new and innovative manure technologies as well as conduct outreach and educate dairy farmers. 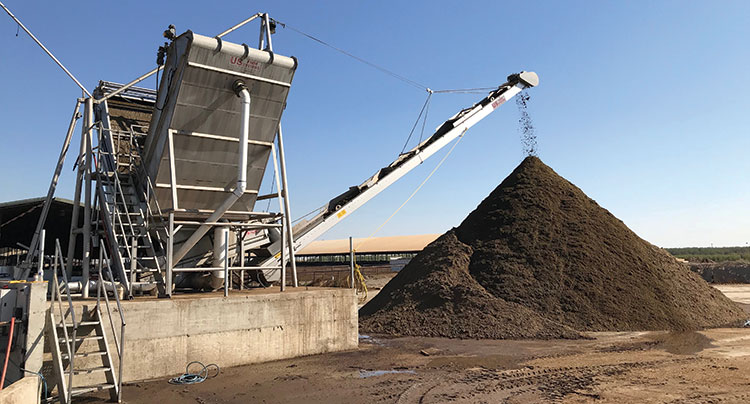 To make manure easier to handle, a solid separator was installed at a dairy farm in Escalon, Calif.

With expectations for Cap-and-Trade funding to continue, California is poised to meet its target within the next decade for early and measurable methane reductions. In addition, many co-benefits exist that dairy producers can expect with a digester or alternative manure management practices. For example, digesters can provide an important revenue stream from the sale of renewable energy, which also contributes to climate change adaptation. Similar benefits may also be provided through production of compost.

Methods such as anaerobic digestion and drying of manure solids can potentially help reduce impacts to water quality, since these projects transform manure into a stabilized, easier-to-handle form. The resulting dried manure compost can be moved and used as a soil amendment benefiting plant and soil health.

Most importantly, these voluntary initiatives provide California’s dairy families with the tools and capacity to engage in climate change efforts. Dairy agriculture is an important economic and food contributor, and it is also playing a key role in California’s efforts to lead the nation in practices to mitigate and adapt to climate change.

For more information on CDFA’s Dairy and Livestock Methane Reduction Programs, visit: DDRDP and AMMP. Follow us on Twitter: @CDFAClimateNews.

This article appeared in the February 2020 issue of Journal of Nutrient Management on pages 18 and 19.
Not a subscriber? Click to get the print magazine.

Cover crops can be a bridge Next