By Brian Dougherty
The author, a former dairy farmer, is currently a research assistant with the ag and biosystems engineering department at Iowa State University. 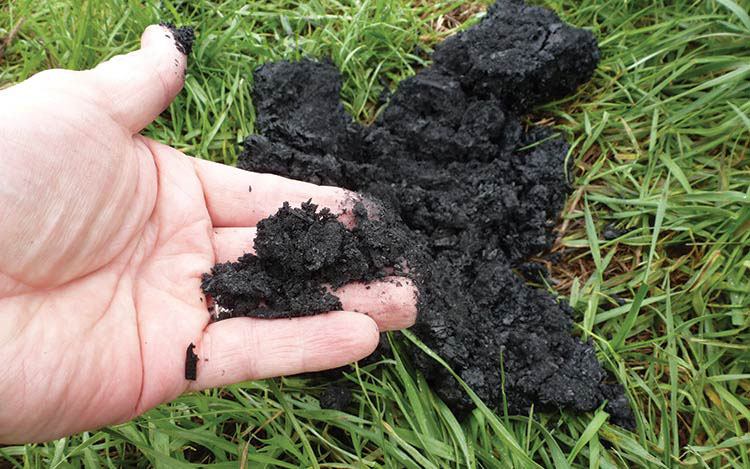 Researchers at Oregon State University found biochar to be successful in addressing many issues associated with manure slurry storage.
Along with many other day-to-day responsibilities of running a dairy farm, managing odors and making efficient use of manure nutrients are becoming more important all the time. Dairy farmers need new and better tools to meet these challenges while keeping animals healthy and productive. One such tool that you may not be familiar with is the use of biochar on livestock operations.

Biochars are materials that result from the heating of biomass in the absence of oxygen in a process known as pyrolysis. The process volatilizes the organic compounds in biomass, leaving behind a carbon-rich material similar to charcoal. The characteristics of a given biochar can vary considerably, depending upon what type of biomass it was produced from and what production process was used.

Biochars differ from charcoal in that charcoal is intended to be burned as a heat source, whereas biochars have traditionally been used as a soil amendment. Research has shown that biochars can improve soil productivity, particularly for degraded and lower quality soils by raising soil pH, water holding capacity, and cation exchange capacity.

Biochars are also capable of adsorbing organic contaminants, heavy metals, pesticides, and other compounds from the environment due to their complex surface chemistry. In addition, biochars break down very slowly. A portion of the carbon dioxide that was taken in during biomass growth ends up as a very stable form of carbon in the soil.

So, what does this have to do with livestock farming? Biochars have unique chemical and physical properties, including a highly porous internal structure. A few ounces of biochar can have an internal surface area the size of a football field! That is hard to imagine, but it is what makes biochar a good soil amendment.

It also makes biochars suitable for a range of applications on dairy farms, including odor, gas, and nutrient adsorption. Research has shown biochar to be effective in adsorbing and retaining nutrients from dairy lagoon effluent. In one experiment, biochar enriched with dairy manure effluent reduced greenhouse gas emissions from soil and elevated soil carbon and nitrogen storage. It has been proposed that biochars can be used to capture excess nutrients from dairy wastewater to create a sustainable nutrient recycling loop.

This is what led my colleagues and me when I was at Oregon State University to research biochar as a biocover for manure lagoons. Various biologically-based materials, including straw, corn stover, wood chips, and vegetable oils have been used as floating covers. While somewhat effective for reducing odor and gas emissions, biocovers have not been widely used. In many cases, their use is not justified due to the expense and difficulty of application and maintenance.

Biochars have the potential to be multi-purpose and multi-benefit cover materials for addressing problems associated with slurry storage. The high porosity, low bulk density, and nutrient retention capabilities of biochars make them promising candidates for use as a biocover. Potential benefits include reduced odor and gas emissions along with adsorption of valuable nutrients. When applied to soil, the nutrient-enriched biochar may serve as a slow-release fertilizer source for plants while improving soils and sequestering carbon.

Our lab experiment compared two different biochar covers to a straw cover and a control with no cover. Results from the two biochars varied considerably, demonstrating that using a biochar with the proper characteristics will be important for this application. One biochar was more effective at mitigating ammonia concentrations above the manure, with reductions of 72 percent to 80 percent.

The other biochar performed better when we measured nutrient adsorption after eight weeks. All biocovers, including straw, were able to adsorb different nutrients to varying degrees. Research indicates that biochar would likely retain those nutrients for a longer period when soil applied, but that was not investigated as part of this experiment.

We also conducted a small-scale outdoor odor study, which showed that three different biochar covers effectively reduced odor offensiveness compared to a control with no cover, whereas a traditional straw cover was not effective. However, outdoor conditions led to cover degradation over time, as has been documented with other biocover types.

High cost and availability of suitable biochars for this practice is a significant hurdle to overcome. Blending biochar with other biocover materials to enhance overall cover performance may be a strategy to improve both efficacy and economics of biocovers.

Many livestock operations struggle with excess nutrient loads and leaching from farm fields. Floating biochar covers could provide a mechanism for passive capture of nutrients with no need for pumps, filters, or additional manure holding tanks. Biochar covers could be blended with the manure and field applied, or collected and sold as a means for exporting excess nutrients off the farm as a high-value soil amendment.

Despite the challenges, using biochar as a biocover material holds promise. With the proper equipment, it is possible to use excess farm and forestry residue to create biochar on site. Some larger-scale producers are actually making biochar from manure as a means to reduce volume and concentrate nutrients. The production process generates energy that can be used to heat water and warm buildings.

Other uses on farms

In addition to adding it to manure slurry, biochar has been used in silage and other cattle feeds, livestock bedding, and poultry litter. The same massive internal surface area and adsorption capacity that makes biochar a good soil amendment may also provide benefits when used as a feed additive.

It is thought that biochar provides benefits primarily as a toxin binder when fed to cattle. Anecdotal reports indicate that cattle are healthier, milk quality and hoof health are improved, animals have fewer cases of diarrhea, and odors are reduced in barns.

Research conducted in Laos found improved rate of gain and reduced enteric methane emissions when biochar was fed to cattle. Research from Australia showed that biochar fed to pastured cows adsorbed nutrients from the cow’s digestive tract and from the manure. The practice showed potential for improving soil properties and pasture health via biochar incorporation into the soil by dung beetles.

It is important to note that biochar is currently not an FDA-approved feed additive for any animal that enters the food chain in the United States. Biochar produced for use as a feed additive requires strict quality control and needs to be done with proper certification.

At this time, biochar is not readily available in many areas and remains cost prohibitive for some applications. However, as more people have become aware of its many uses, interest in using biochar has grown exponentially.

Stay tuned — biochar may be coming soon to a farm near you.

It’s not a debate over clean water Next