By Mike Rankin
The availability and price of urea have made it a popular fertilizer choice for many different crops, including forage grasses. Most users know that when urea is surface applied, there is always the risk of nitrogen loss to the atmosphere if adequate rainfall doesn't occur soon after application. 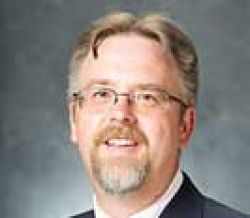 Dennis Hancock
Dennis Hancock, University of Georgia forage extension specialist, recently reported that research in his state has documented nitrogen losses as high as 48 percent when urea is surface applied; though more typical loss figures are documented at about 20 percent of the total nitrogen applied as urea. The culprit in this loss equation is a soil enzyme called urease. Widely distributed, urease aids urea hydrolysis, resulting in the release of ammonia. This has the dual economic effect of not providing the nitrogen being paid for and reducing crop yield. One means of reducing urea nitrogen loss is by using additives called urease inhibitors. These products slow the rate of urease activity. Another strategy is to apply encapsulated urea; these are fertilizer granules with a polymer coating that release nitrogen over a longer time frame. During the past eight years, Hancock and his co-workers at Georgia have been experimenting with various strategies to curb urea nitrogen losses. They used bermudagrass hay fields, harvested four times per year, and measured both nitrogen loss and forage yield. Ammonia volatilization loss was documented using an acid-trap. Untreated urea was compared to urea treated with Agrotain, a urease inhibitor; and NutriSphere-N, a product also touted as controlling urease reactions. A third comparison was made with ESN Smart Nitrogen, a polymer-coated urea product. Hancock reported that ammonia losses from the untreated urea averaged 17 percent of the applied nitrogen. Agrotain and the ESN Smart Nitrogen were effective in preventing most of this loss (see figure below). NutriSphere-N offered very little in the way of controlling nitrogen losses during the experiment. 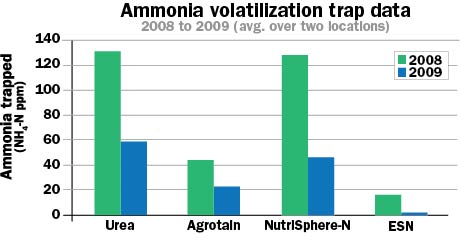 The Agrotain-treated urea plots yielded 10 percent more bermudagrass compared to untreated urea. The NutriSphere-N urea plots had similar yields to the conventional urea; further evidence the product was ineffective for controlling nitrogen loss in this study. In the initial studies, the ESN Smart Nitrogen produced lower bermudagrass yields than the Agrotain treatments, even though the product was effective for reducing nitrogen losses. Hancock surmised that the protected nitrogen was actually releasing too slowly for the fast growing bermudagrass. He later found that blending 50 to 75 percent coated urea with conventional urea had the desired effect of making more nitrogen available sooner to the growing grass. In fact, using blends enabled the researchers to maintain yields with only two fertilizer applications during the growing season instead of four. The Georgia agronomist noted that the additional cost of an effective urea additive or coated urea product often is much less than the value of additional yield captured from protecting the urea nitrogen from volatilization losses.

A government program that actually worked Next