The nutrient content of anaerobic digester effluent serves as a valuable fertilizer source. 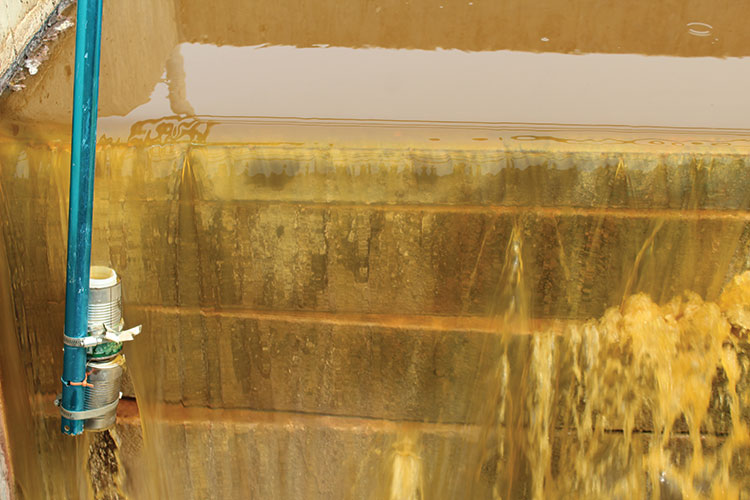 More and more anaerobic digesters are being built on dairies. These digesters capture carbon from manure as biogas. The gas is then processed and used to power vehicles, improving the greenhouse gas footprint of the dairy industry.

Out of the digesters comes treated water that still has a high nutrient content, much like lagoon water, which can be applied to cropland as a fertilizer source. It is important for dairy operators and forage crop producers to understand the chemical makeup of this digester effluent before making decisions about how to apply it to cropland.

Changing with the seasons 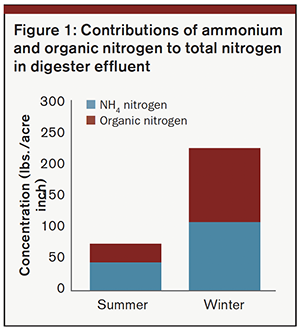 Data from a current project funded by the California Dairy Research Foundation provides insight into the nutrient content of digestate, the effluent coming out of the digester (Figure 1). Samples were taken at six freestall dairies with anaerobic digesters. Samples were collected from each dairy under summer and winter conditions. Four to eight samples from each digester were collected over several days in each season. Cows had feedline soakers and access to corrals in summer. During winter, cows did not have corral access and soakers did not run.

An early analysis of the data shows a distinct seasonal change in the chemical and physical makeup of digestate. The physical and chemical components of digestate were lower in summer than winter (Table 1). This was expected, as herd management typically changes with the seasons. In summer, water from soakers was used to cool cows, and less manure was collected because cows spent less time in the barn. Bedding of freestalls occurs more frequently in winter, increasing the liquid stream nutrient contribution. That’s why the flush-lane collection in summer is more diluted than in winter.

The greatest differences in manure characteristics occurred between seasons on each dairy. Results were consistent within a season from each dairy and did not exhibit a lot of variability.

Total solids are everything in the digestate besides water. This includes inert solids (or ash) and volatile, organic solids. Carbon in the organic matter is what is converted in part to methane and carbon dioxide and captured as a biogas. Carbon coming out of a digester in effluent escaped methane production. When digestate is land-applied, it can add to the carbon stock of soil, which has potential benefits for soil quality.

In the winter, we observed the ammonium to be a lower proportion of all the nitrogen found in the digestate (Figure 1), meaning less of the digestate nitrogen was immediately plant available. This is important to know. Keep in mind that in winter, microbes are less active, so they are slower to decompose the organic nitrogen.

Phosphorus is largely found in fine solids in the digestate while potassium stays dissolved in the water. Both elements are essential for plant growth and development and are found in abundance in the digestate. The electrical conductivity is a measure of salinity, which is the property of how much salt is dissolved in water. Essential plant nutrients as well as solutes toxic to plants contribute to salinity. So, it’s important to remember that having a high nutrient content in the digestate can also mean having high salinity, which can cause stress to plants when land applied.

Understanding seasonal variability of digestate is important for proper manure sampling and utilization. Consider the range of electrical conductivity values above. Forage corn has an average salinity tolerance threshold of 1.8 deci-siemens per meter (dS/m) and a yield reduction slope of 7.4. That is, forage corn yield is expected to decline by 7.4% for every dS/m above 1.8 in irrigation water. If a corn crop were fully irrigated with only the least saline effluent shown above, we would expect a yield reduction of at least 11.8% due to season-long salinity stress.

Higher saline waters are more likely to cause an acute salinity injury called specific ion toxicity. This injury is commonly known as “salt burn” and looks like dried leaves starting at the bottom of the plant. Knowing the expected ranges of nutrient and salinity concentrations means you can make better fertilizer value and crop safety predictions when blending the digestate with irrigation water.

Notice the rates of macro-nutrient removal from the field when corn silage is harvested (Table 2) and refer back to the macro-nutrient concentrations shown in Table 1. If you were ambitiously farming for 40-ton silage corn on phosphorus and potassium sufficient soils, you could replace those elements with three acre-inches per acre of the average digester effluent in summer, and you’d likely be overfertilizing with potassium by 188 pounds per acre of K2O.

Since nitrogen is so reactive in the environment, many inefficiencies exist. It’s possible that some of the crop’s nitrogen demand will need to be met with other nitrogen sources such as manure solids, compost, or synthetic fertilizer.

This article appeared in the February 2022 issue of Journal of Nutrient Management on pages 8 and 9. Not a subscriber? Click to get the print magazine.