Soil organic matter acts as a warehouse for an array of nutrients.

The author is a research soil scientist for the Institute for Environmentally Integrated Dairy Management, USDA-Agriculture Research Service. 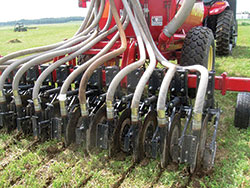 A large fraction of soil organic matter is made up of carbon, which is derived from living matter.
Soil productivity is a function of several interacting factors including parent material, soil texture, drainage, pH, nutrient levels, and soil organic matter content. Except for soil texture, optimizing these other factors is paramount to maintain or improve crop yield potential.

Soil organic matter (SOM) is of particular importance to soil fertility and health. Sometimes referred to as “the living, the dead, and the very dead” in soil science circles, SOM is comprised of former living organisms at various stages of decomposition. SOM has a multiplicity of beneficial effects on plant growth due to its impacts on biological, chemical, and physical properties and processes.

While SOM is chemically heterogeneous, a large fraction of it is organic carbon. Soil organic carbon is derived from living matter and constitutes most of the total carbon in humid, temperate climates. Figure 1 shows the relationship between total carbon and SOM for a set of soil samples collected at the Marshfield Agricultural Research Station in Stratford, Wis., as part of a cover crop study. 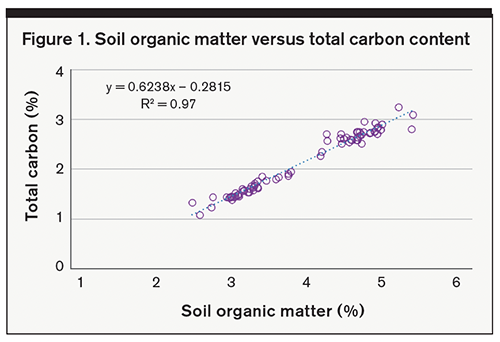 The strong linear relationship between total carbon and SOM shown here is quite typical. The fraction of SOM that is carbon varies for different soils. Based on the linear regression, about 62% of SOM is carbon.

SOM serves as a warehouse for nutrients beyond carbon. In particular, nitrogen (N) and sulfur tend to be highly associated with SOM. Many land grant university soil fertility guidelines use SOM levels to adjust N recommendations. Using the same data set as above, a strong relationship exists between total carbon and total N (Figure 2). This is the reason SOM alone contributes significant amounts of plant-available N to crops during the growing season, as microbes mineralize organic N to ammonium-N. 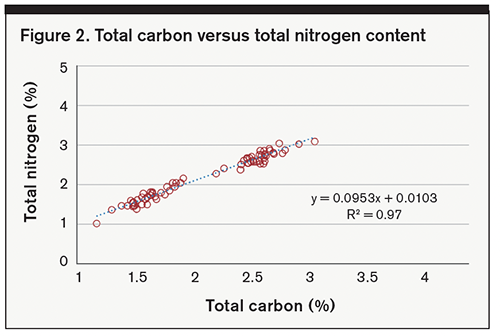 Phosphorus and micronutrients are also intimately associated with SOM. In addition to these nutrients residing in SOM itself, the ability to retain positively charged nutrients from the soil solution (such as calcium, iron, magnesium, manganese, copper, and zinc) increases with greater SOM due its net negative chemical charge. In addition, organic acids from SOM can enhance plant-available phosphorus via chelation of aluminum, calcium, and iron that render phosphorus unavailable.

Developing a better understanding of SOM composition and its impacts on soil health is an active research area. Among the many important substances constituting SOM, a glycoprotein called glomalin appears to be critical.

Glomalin is thought to originate mainly from arbuscular mycorrhizal fungi, a widespread species infecting nearly 90% of terrestrial plants. Research shows that glomalin can comprise up to 25% of SOM, with a relatively long residence time (more than 40 years) due to its high percentage of aromatic and carboxylic functional groups.

Physically, glomalin acts as a cementing agent and tends to be enriched with nutrients. Several studies have reported close associations between glomalin content and SOM or soil organic carbon contents. Research has clearly demonstrated that glomalin affects soil physical properties.

The bottom line is that managing SOM is a critical aspect of soil health because of the multiple beneficial effects on soils. Practices that maintain or elevate SOM are essential for realizing long-term agronomic and environmental benefits. A continued challenge going forward will be determining the best way to synthesize the large amount of emerging soil health data to develop effective soil tests and tools for producers.

This article appeared in the February 2022 issue of Journal of Nutrient Management on pages 16 and 17. Not a subscriber? Click to get the print magazine.

Finding fields that need manure Next