Managing soil, manure nutrients, and water quality has created a valuable and symbiotic relationship between this crop grower, dairy farm, and custom applicator. 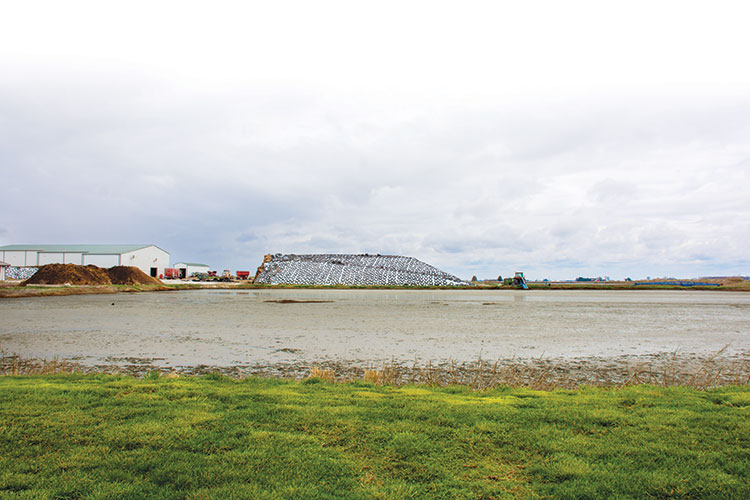 The manure in these lagoons is applied to some of the fields operated by Drewes Farms, a cropping operation that grows corn, soybeans, wheat, and alfalfa.

Manure handling starts with the animal, but the end user is an essential part of the equation. On livestock farms that have a limited land base, it often requires a working relationship with other landowners to make use of those valuable nutrients.

For crop farmers Mark and Tyler Drewes of Drewes Farms in Custar, Ohio, manure from neighboring farms is one key to their success. The father-son duo grows corn, soybeans, wheat, and alfalfa on 10,000 owned and rented acres in the northwestern part of the state.

Mark explained that where they farm used to be heavy in livestock production, but over the years, the focus turned to crops, and some of the diversification was lost. He said a resurgence of dairy farms in the area gave way to more opportunities.

“The manure is a very welcome source of nutrients,” Mark said. “Not just because of the economics, but there are so many other reasons why.” The Drewes talked about nutrient management and building relationships during a farm tour that was part of the Waste to Worth Conference. 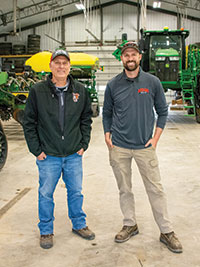 The father and son pair of Mark and Tyler Drewes operate Drewes Farms in Custar, Ohio.
For nearly 10 years, the Drewes have been doing their own soil sampling, a project spearheaded by Tyler. The younger Drewes was a business major in college who decided to join the family farm, and he credits his father for allowing him to make a place for himself in the operation. Upon his return, he took charge of the precision nutrient management and soil sampling for the farm, an area that was previously outsourced.

Fields are typically sampled in 2.5 acre grids, which allows the Drewes to understand the soil conditions and make accurate nutrient applications if needed. “We want to know the ins and outs of every field we farm so it can be made better for us and our landlords,” the pair explained.

They sample every field on a three-year rotation. “It’s very important,” Tyler said. “Every field is different, and we have a lot of unique soil types.”

Nutrients are applied to the fields using nearly all variable rate technology (VRT), and they hope to be 100% VRT in the near future. After 12 years of intensively managing their nutrients, Mark said it is amazing how uniform their soils have become within each field.

Water quality is a topic of conversation in Ohio, especially the past few years with the launch of H2Ohio, an initiative first funded in 2019 to address the water quality issues that have been building in the state for decades. Algal blooms on Lake Erie, aging infrastructure, and lead contamination are some of the problems the initiative hopes to combat.

Farms were one of the groups put under the microscope and deemed an area of opportunity in terms of improving water quality. After scientific and economic studies, 10 practices proven to reduce agricultural phosphorus runoff became part of the H2Ohio program, and economic incentives were made available for farmers who develop nutrient management plans that incorporate a combination of such practices, including soil testing, VRT fertilization, cover crops, and edge-of-field buffers.

Even though farm practices that protect water quality are suddenly under the spotlight, they are nothing new for the Drewes family.

“We knew how important it was before water quality issues arose,” Mark said. “It has always been a focus for us.”

Tyler said they had already transitioned some of their farming practices prior to joining the H2Ohio program. “We made a definitive decision to move in that direction and to do things to the best of our ability,” he said.

Mark echoed those comments. “Everything we do is environmentally conscious,” he emphasized. “Large operations get accused, often unfairly, that they don’t care or are environmentally unfriendly, but the total opposite is true,” he continued. “We raised our family and grandchildren on these farms. We drink the water. We love that lake. We have more commitment to this area environmentally than anyone, and that’s why we are proactive.”

With that in mind, Mark noted that H2Ohio was right up their alley. They felt overall that the initiative was well thought out. The Drewes were already doing many of the incentivized practices on their farm, and they appreciated that the program does not penalize farms for practices put into place prior to sign up.

Tyler noted that the biggest drawback of H2Ohio is the record keeping, which he called intense. He felt this could be especially challenging considering the demographic of many farmers.

Mark agreed. “If Tyler wasn’t here, I don’t think this farm would be participating,” he shared.

Record keeping is part of the game, though, as Tyler also noted the extensive records needed to grow crops for one of the dairies Drewes Farm partners with, Reyskins Dairy LLC, whose milk is shipped to Danone. It is all part of a very beneficial partnership, though. The Drewes grow feed for the dairy and utilize the manure produced by the 2,000 cow herd.

“It’s a very symbiotic relationship,” said Tyler. “We have the acres, and they have the cows. We are able to spread those nutrients and use our acres to their and our advantage.”

Reyskins Dairy LLC is owned by Mark van de Heijning, who moved from Belgium to the United States in 2005 to leave behind the growing restrictions being imposed on Belgian farmers. In the dairy’s sand-bedded freestall barn, a vacuum sweeper cleans the manure from the alleyways three times a day. The 25 million gallons of manure produced annually is stored in a series of lagoons and is custom applied once a year.

Both father and son said they have worked well with van de Heijning over the years, and they value that relationship deeply. The dairy buys a lot of corn silage, corn, and haylage from the Drewes — many commodities and dollars are exchanged between the two farms.

Besides cattle manure, Tyler said they also utilize hog manure and poultry litter to fertilize fields. In general, they are gravitating toward more diverse manure sources both because of their crop needs and the rising commercial fertilizer costs.

What the manure is worth is an always evolving-question, and Mark said that for every relationship, there is a different answer.

“We have to make sure it is economical, for them and us,” Mark said. While $8 corn is an issue, so is $2 corn. “There has to be an equilibrium, and there are some trade-offs,” he said. “For us to be successful, we want them to be successful.”

Out to the fields

The third leg of this partnership stool is the custom manure applicator. For the Drewes, much of their application and silage harvest is done by the team led by Walter Manders of Manders Custom Farming, based out of Weston, Ohio.

“It is a very symbiotic relationship,” Mark repeated. “We all coexist and are all very dependent on each other.” The three businesses — Drewes Farms, Reyskins Dairy, and Manders Custom Farming — have worked well together the past 15 years.

The farms that produce the manure often provide sample results, but the Drewes will also do some of their own manure sampling prior to application. “We have trust in them, but we have to verify. Ultimately, it is our ground, our livelihood, and our family,” Tyler noted.

Mark and Tyler said that one of their biggest challenges is a short application window. Fall application is not a great option in their area, and cool, wet springs limit the number of days available for spreading those valuable nutrients. A continuous goal is finding ways to extend the hauling season by adapting equipment and using practices such as sidedress application to growing crops.

“We need to get the manure out for our farmers. It makes us nervous,” Mark said. “We are looking for ways to spread the time frame.”

The Drewes like to be on the forefront when it comes to managing nutrients, and they are willing to try new practices as long as they make sense on their farm. “It’s an ever-changing environment of what we do and how we do it,” Tyler said. “If it works out environmentally, agronomically, and economically, we will do it.”

Mark jumped in, re-emphasizing their commitment to innovation. “If it meets those three targets, it is going to happen here. But, if one of the three won’t work, it doesn’t work. We are in a business, and economics have to be part of the equation,” Mark stated.

While many factors play into these practices, the financials are certainly a driving force. With escalating commercial fertilizer prices that doubled, tripled, or quadrupled from just one growing season ago, Mark said it is easy to recognize the value they see in manure.

In addition, the Drewes are also willing to spend money on conservation practices. “We try to be the first in line for new practices or doing studies on farms. We want to be involved,” Tyler said. “We want to know about it, and we want to know how to correct problems.”

On various fields, they have put in drainage tile and planted windbreaks and buffer strips. They also installed water control structures in a vast majority of their fields. They said that managing them to ensure they are opened or closed can be labor intensive, but environmentally, they are a great tool.

The Drewes work with many fields that they have rented for years, and Mark said they are fortunate to have access to that land.

“As a cash crop farm, we are lucky to have a synergy with the local livestock farms. We are all on the same page,” Mark said, noting that is not always the case between these two different types of farmers. He also recognized that there are cultural differences between them and some of the farm operators in the area.

“Making that all work is part of the process,” said Mark. “We often ask the farms we work with, ‘How can we accomplish your goals and our goals together?’”

When it comes to soil and water quality, Mark said, “It took us years to get to this point, and it is going to take years to get back to where we were.”

He continued, “The soil health issue is not new. It is something we always strived for,” giving credit to his grandfather and father who farmed here before him.

This experienced farmer learned long ago that standing still and working individually is not the best way to make improvements in nutrient management.

“I’ve been doing this for 40 years,” said Mark. “Innovation is what it is going to take.”

This article appeared in the August 2022 issue of Journal of Nutrient Management on pages 12-14. Not a subscriber? Click to get the print magazine.
By Abby Bauer, Editor
Inspired to farm closer to nature
Small but mighty
Moving down the manure pipeline
A story about sludge
Words of wisdom
Committed to memory