Irrigation of liquid animal manure has a reputation for elevating ammonia loss, but research has proven otherwise.

Large-bore traveling gun and center pivot irrigation systems have been used to apply treated lagoon water, liquid animal manure, and untreated slurry from swine and dairy farms in many parts of the United States. The primary advantages of using irrigation equipment to spread manure on cropland are the lower costs for energy and labor and the higher speed of application as compared to using a tractor-drawn spreader. The primary disadvantages are related to greater odor release and the possibility of spraying manure on roads or another person’s property.

The loss of nitrogen

The amount of nitrogen lost to the air as ammonia from application of manure is important for two reasons. From the farmer’s point of view, the loss of nitrogen as ammonia gas represents fertilizer that could have contributed to the production of a crop.

From an environmental point of view, ammonia lost from a field to the atmosphere is a source of air pollution that can combine with sulfates and nitrates to form extremely fine particulate matter that can have harmful effects on human health. This particulate matter can also contribute to water pollution when deposited into surface water by rainfall.

For many years it has been assumed that more ammonia nitrogen was lost if irrigation was used to land apply liquid manure as compared to application with a spreader. Some governmental agencies have outlawed irrigation as an option even if manure treatment methods have been used to reduce the nitrogen content and odor.
A previous study and several extension publications state that irrigation of animal manure raises ammonia-N loss by 10% to 25%. It was thought that using irrigation to apply liquid manure resulted in higher ammonia loss as compared to application to a field with a spreader. This additional ammonia loss was assumed to occur as the manure traveled through the air from the end of the irrigation nozzle and before it struck the ground.

Consequently, some government agencies have discouraged irrigation as a means to fertilize cropland with manure or have prohibited it completely due to concerns over an increase in ammonia emissions. Such regulations have a significant negative impact on dairy and swine producers who have invested in high levels of manure treatment that result in large volumes of dilute, liquid manure with low concentrations of nitrogen, phosphorous, solids, and minimal odor potential. Pumping diluted liquid manure through pipes to irrigation equipment is typically the most cost-effective means to use the water and nutrients to grow crops.

A meta-analysis of 55 data sets from three independent sources was performed to quantify the ammonia-N lost during the interval of time from when the liquid manure exited the irrigation equipment and when a sample was collected on the ground. The study included data for irrigation of untreated liquid and slurry manure, surface water from treatment lagoons, and very dilute effluent from an oxidation ditch that was used to provide advanced treatment for cattle manure. The data set also included three types of irrigation equipment: a traveling big gun, large-bore solid set sprinklers, and center-pivot irrigation.

The same type of analysis was done for the total nitrogen data. Total nitrogen includes the organic nitrogen and TAN. The results indicated that irrigation did not significantly alter the concentration of TKN. On the average, the TKN content of the ground-collected samples was slightly higher than the irrigated samples, which was obviously impossible. 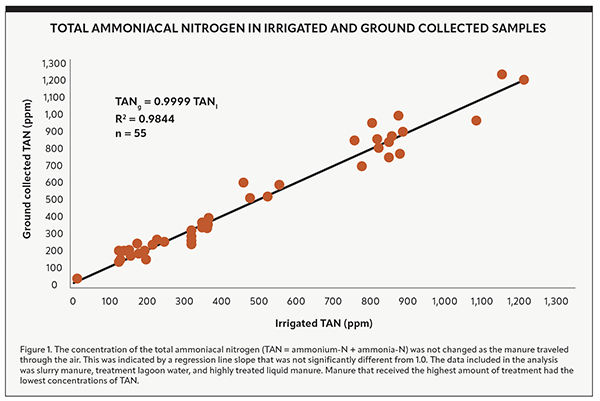 The results of this study do not imply that ammonia volatilization after manure strikes the ground is to be ignored. The suitability of irrigation as a liquid manure application method should be evaluated based on the level of treatment and the potential impact of odors on neighbors. Also, the irrigation system should be designed and operated so as to prevent overspray onto roads, property owned by neighbors, and any type of surface water. In addition, irrigation of liquid manure must be delayed if runoff begins.

Application methods that reduce ammonia loss and odor, such as band application, direct injection, or similar nitrogen conserving methods, are recommended if untreated slurry manure or lagoon sludge is to be used as a natural fertilizer substitute.

This article appeared in the November 2022 issue of Journal of Nutrient Management on pages 10-11. Not a subscriber? Click to get the print magazine.