Inspired to farm closer to nature

At Roche Grain Farms, adjustments made to current farming practices lead to a more regenerative future. 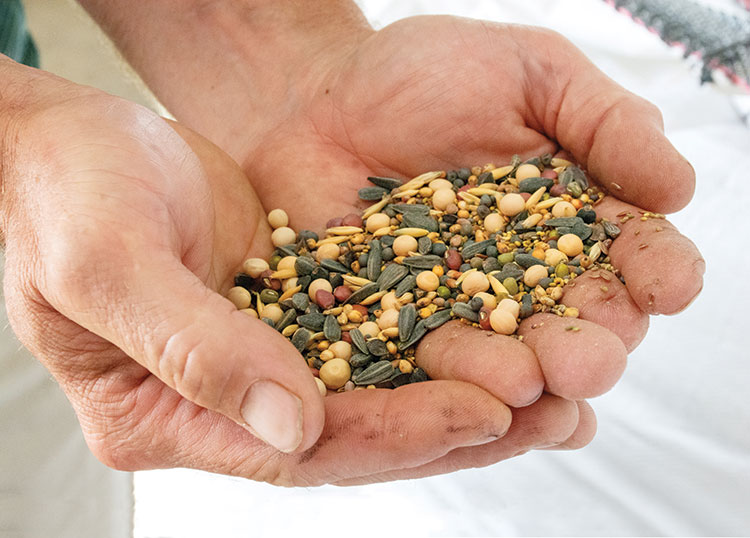 “Diversity is key” when it comes to cover crop mixes, according to Kevin Roche of Roche Grain Farms.

Farming is nothing new for the Roche family, who has been raising livestock and growing crops at their farm in southeastern Wisconsin for 170 years. What has changed in recent years, though, is the family’s focus on regenerative agriculture. Over time, their goals for farming have become more centered on working in harmony with nature — rather than against it — to improve the soil on their fields.

Three of the six Roche brothers — Kevin, David, and Dennis — followed in the footsteps of their father and uncle when they took over the family business. Today, the farm is owned as an equal partnership between the trio and their wives, Tracy, Amy, and Jacki. Their father is still involved with the farm, and at the age of 85, one of his main jobs is installing drain tile in their fields. 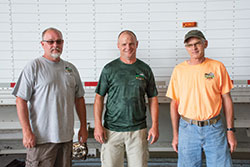 Dennis, David, and Kevin Roche own and operate Roche Grain Farms near Columbus in southeastern Wisconsin.
All three brothers attended the University of Wisconsin-River Falls. Kevin returned home first after graduation to start his farming career with his father. David worked in landscaping for a few years, but when the opportunity arose to buy into the farm, he returned as well. Dennis served in the Navy before attending college, then came back to the family business.

The former dairy farm transitioned to beef cattle production decades ago, and in 1972, feedlot facilities were built on the farm. Today, the Roches finish about 1,200 head of Holstein steers, dairy and beef crossbreds, and beef steers annually. Cattle arrive at the farm in groups of 110 head between 400 and 700 pounds and are finished in about 300 days. The steers are sold to a few different buyers depending on market preferences. David said they are always running projections and locking in prices to ensure the cattle business is making money.

The cattle are fed homegrown forages along with corn fines from the co-op and distillers grains. Five different rations are utilized depending on age of the cattle and their stage of growth. When the cattle arrive at the farm, they are vaccinated, implanted, and treated if needed. The best treatment they have found, though, is to keep the steers clean and well bedded, which helps ward off many issues. 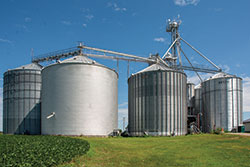 Corn and soybeans are harvested and stored on the farm. The Roches’ bins have capacity for 450,000 bushels.
The grain side of the operation includes 3,700 acres located within a 5-mile radius of the farm that are used to grow corn, soybeans, and wheat for cash cropping. They also grow corn for silage and rye that is harvested in the form of ryelage as a forage source for their cattle.

The introduction of rye as a cover crop is just one example of the steps the trio has taken to improve the health of their soils. A mix of cereal rye, vetch, and winter peas is planted following corn silage, grain corn, and soybean harvest. The rye is typically what survives through the winter and some of the acres are harvested in the spring.

David said the best part of ryelage is that they can feed less corn to the cattle. The forage also provides different nutrients in the ration, and he said the cattle seem to prefer it over corn silage. Overall, they can include less energy in the ration, and as another bonus, they are getting two crops off the same field.

After wheat harvest, fields are planted with a cover crop mix of seven to eight species, including more legumes that provide additional nitrogen. “When it comes to cover crop seeds, diversity is key,” Kevin said. “Cost is a factor too; as with everything else, these costs continue to rise.” Some of their rye is harvested as grain and is used for seed.

A valuable source of information on cover crops and other soil-friendly practices has come from a farmer-led organization called the Dodge County Farmers for Healthy Soil and Water. Kevin was involved with the group initially, and David currently serves on the board of directors. “It has been really helpful working with this group,” David said.

It was a presentation at one of these meetings that really spurred their interest in soil health. Ray Archuleta, known as “The Soil Guy,” is a nationally known expert who talks about soil health and cover crops based on his experience of working over three decades for the National Resources Conservation Service. Archuleta’s comments motivated them to make changes to their more conventional farming practices.

The Roches were also inspired by Rick Clark, a crop and cattle farmer in Indiana who is on the forefront of regenerative farming. “He is ahead of where we are, and we are trying to emulate him,” David said.

Organic farming is appealing to the Roches, but the transition is not practical for them right now. The same is true for cattle grazing. However, they are trying to use as many organic practices as possible and are really focusing on regenerative agriculture.

The brothers have transitioned toward cover crops on 100% of their fields because they realize the benefits. Kevin said that cover crops have improved soil health. “The crops are more uniform from end-to-end now,” he said. They can also plant into wetter fields in the spring, even in their clay-type soils, if the fields had a cover.

David noted that their soil is now home to plenty of worms, which he explained is a good indicator of soil health. He added that cover crops have also helped reduce erosion.

Corn and soybeans are planted into cover crops that can be up to knee high. For corn, they have found it works best to kill off the cover crop three days after planting. For soybeans, it is done one to two weeks after planting.

Since they have been using no till and cover crops, they have noticed other changes in their fields, too. For one, “The weed pressure is different,” said Kevin. The brothers said they are managing around a different set of weeds now.

The brothers noted that cover crops are only part of the equation, though. Pairing cover crops with no-till is important as to not destroy the biological activity in the soil.

Kevin said a lot of what they learned has been by trial and error, and David jumped in to say they have had plenty of failures, too. It’s all part of the learning process.

“No-till takes more management,” Kevin noted. “Tillage can cover up the symptoms for unhealthy soil. It’s like aspirin for a headache.”

The Roches have been cutting down on potash and phosphorus applications the last few years. That’s because past soil tests revealed that a lot of those nutrients were tied up in the soil, but with more biological activity underground, the nutrients are more available.

Some of the nutrients applied to the fields come in the form of manure from their beef cattle. Their housing systems provide both solid and liquid manure for application.

The young steers are housed in bedded-pack barns. A layer of wood chips is covered by cornstalks. Sheets of gypsum drywall are laid on top of the pack to reduce the smell and, because it ties up the ammonia, they feel the drywall keeps the steers healthier. The gypsum also contains ammonium and sulfur, which eventually provides nutrients to the land, the brothers noted.

The solid manure is hauled out of the barns and is put into windrows to be composted. The rows are turned more often in the beginning of the summer but less often as time goes on. They have found that they dry out too much if turned too often, which slows down the composting, so they have gone from turning them once a week to turning them every three weeks to conserve the moisture. They noted that the quality of the compost product at the end depends on the effort that is put into managing the windrows.

Kevin said in the fall, they apply 2.5 to 3 tons of compost per acre, which is a valuable soil amendment, but he emphasized that there’s more to improving soil health than just adding compost. “It’s a combination of compost, no-till, and cover crops,” he said. “You have to stop digging up the worms’ home.” 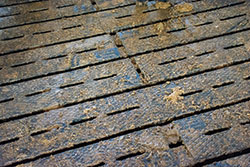 covered slats and half did not. The steers in the pens with the mats were lying down more and gained 0.25 pound more per day, they observed, so they soon added mats to the whole barn.

Manure is stored underground in an 8-foot deep pit, and a biological control product is added to the manure to help break it down. The liquid manure is hauled out and applied in spring, summer, and fall, before corn planting, after wheat, and after fall harvest.

David said liquid manure is always applied to cover crops or ground that is soon to be planted. “We want a crop to be there to take in those nutrients right away,” he explained.

Manure is tested prior to application, and soils are tested every three to four years, as scheduled in their nutrient management plan. “Manure is a great fertilizer,” the brothers agreed, and they try to get the most out of it by spreading it out over all their acres, ensuring that every field gets an application of manure every two or three years.

The farm is operated with family labor, plus two full-time employees that assist with all aspects of the farm. “We all work well together,” David noted.

While corn chopping is done by a custom harvester, they do their own combining and storage. On the original dairy farm site is now a machine shed. On another farm sit several grain bins with 450,000 bushels of storage. What is not used to feed their cattle is sold to local co-ops for grain or for ethanol. The addition of a new grain dryer this past summer will allow harvest to be completed more quickly, they noted.

The brothers’ favorite aspects of farming are seeing plants grow and recognizing the benefits of different practices. Kevin said he also appreciates the opportunity to work with his sons and daughters on the farm, and David agreed. “It’s a great way to raise a family,” he said

It is clear that at the core of their farming practices is family, which remains very important to all of them. Between the three brothers, they have 17 children. While none of their offspring are working on the farm full time yet, there is plenty of potential for the farm to carry on for another generation. With regenerative agricultural practices in place, the Roches hope the land will be in even better condition when that time comes.

This article appeared in the November 2022 issue of Journal of Nutrient Management on pages 12-15. Not a subscriber? Click to get the print magazine.
By Abby Bauer, Editor
Small but mighty
Moving down the manure pipeline
A story about sludge
Working in harmony
Words of wisdom
Committed to memory