The use of poultry manure as a fertilizer has been found to improve crop yields and soil health over time. 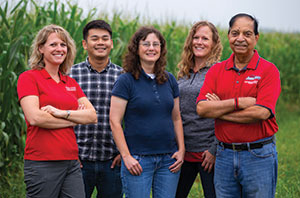 A long-term study of the impacts of continued poultry manure application on soil health and nutrients, water quality, and crop yield response with economic analysis was completed in the fall of 2017. The 20-year study was initiated in 1998, with a 12-year corn-soybean phase (CS Phase) from 1998 to 2009, and an eight-year continuous corn phase (CC Phase) from 2010 to 2017.

The goal of the study was to provide a long-term assessment of the environmental and economic affects of poultry manure application in tile-drained agricultural systems of the Upper Midwest. The results provide a comprehensive overview of poultry manure’s impact on agroecosystems, supporting on-farm decision making and watershed level nutrient management strategies.

After 20 years of manure application, there were measurable improvements in multiple parameters of soil health in the manured plots compared and plots fertilized with UAN. Such benefits included more total soil carbon, particulate organic matter, and improved soil structure.

Deep-soil core samples were collected in the fall of 2017 to a depth of 120 centimeters (cm) (48 inches) and analyzed in five increments:

A closer look at the nutrients

After 20 years, Bray-P analysis indicated average phosphorus (P) levels of 317 ppm (parts per million) in the topsoil of the plots treated with poultry manure. Elevated phosphorus concentrations in topsoil pose a risk for contributing phosphorus to surface waters during storms.

When soils carry high P levels, conservation practices should be used to reduce erosion. Producers can also consider applying poultry manure based on the P needs of the crop instead of the N requirements.

While manure application had the greatest impact on soil phosphorus, nitrate (NO3-N) levels were most notable in the tile drainage. Comparing the impacts on drainage nutrients of poultry manure (PM) and UAN applied at the same N rates throughout the study (CS Phase: Low PM versus UAN; CC Phase: High PM versus UAN), we see that UAN application resulted in higher average NO3-N concentrations under all conditions.

For this article, we separated the average drainage results from our study into four stages of field management or crop growth: before manure and UAN application; postapplication through the early growing season; the rapid growing season; and late season after the crops have reached maturity (see figure). The late-season CC Phase results were a single sample date.

Tile drainage orthophosphate (PO4-P) concentrations were highest in the poultry manure-treated plots, but they remained relatively low throughout the study period. An increase in PO4-P concentrations was not detected over the years.

Throughout the 20-year project, consistently positive yield results were measured with manure application. During the CS Phase, corn yields were higher with both the low and high poultry manure application rates compared to UAN. Even though fertilizer was not applied to the soybean crops during this same time period, the soybean yields were also higher in the poultry manure plots.

The same trend was observed during the CC Phase, with higher corn yields measured in both the low and high applied poultry manure plots. Again, the low PM application during the CC Phase was half the UAN application rate. It should be noted that the UAN plots did not receive a regular maintenance application of phosphorus and potassium, likely inhibiting crop growth.

A Techno-Economic Analysis (TEA) was conducted to compare the potential profitability of poultry manure with UAN fertilization individually for the CS Phase and CC Phase of the study. One method for evaluating profitability is comparing the revenue per dollar of input cost (RPI).

The input costs included estimated production costs and the manure or UAN costs based on this study’s application rates. Total revenue was determined using the average crop yields and average annual crop prices for both phases of this study.

A difference in RPI was not observed between the poultry manure and UAN treatments with a corn-soybean rotation. A higher RPI was observed with poultry manure treatment during the CC Phase, indicating that poultry manure can be a profitable option for continuous corn production.

This comprehensive 20-year assessment of the environmental impacts of poultry manure produced promising results for producers. Greater yield was typically observed from field plots amended with poultry manure; yet, NO3-N concentrations in drainage were generally lower than the UAN-treated plots.

PO4-P concentrations in drainage water were well below the EPA-recommended total phosphorus (TP) limit of 0.05 milligrams P/L for streams discharging into lakes. Although phosphorus levels rose significantly in the topsoil of the poultry manure-treated plots, we did not measure an increase in PO4-P concentrations in drainage water over the study period.

This article appeared in the February 2020 issue of Journal of Nutrient Management on pages 28 and 29.
Not a subscriber? Click to get the print magazine.

Tracking down the nitrate source Next