These pathways may play a key role in tile drainage systems.

By Eric Cooley
The author is co-director of the University of Wisconsin-Madison Division of Extension Discovery Farms Program.

Discovery Farms is an on-farm water quality research and outreach program that is part of the UW-Madison Division of Extension. Tile drainage monitoring data collected on farms in Wisconsin has shown that macropores may play a key role in tile drainage systems.

Macropores are preferential flow paths in the soil that can provide major transport pathways from the soil surface to tile drainage systems. Macropores can be formed by a variety of factors, including earthworm burrows, decayed root channels, shrinkage cracks, and the structural porosity of the soil. 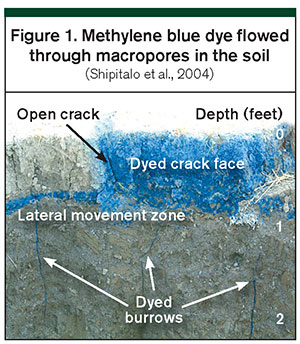 As observed when methylene blue dye is applied to the surface of the soil in Figure 1, the dye moved through the soil using a combination of macropores. Most of the dye entered the soil through shrinkage cracks in the soil surface, then moved laterally along the plow layer, and finally moved deeper in the soil profile through earthworm burrows. Water and nutrient transport through the soil matrix is much slower than through macropores, allowing for enhanced nutrient retention, whereas macropores can rapidly transport water and soluble nutrients to tile drains.

The development of macropores in soil varies significantly with soil type and management. Soil that has been no-tilled long term typically has greater structural porosity, which supports macropore development. Earthworm activity also tends to be greater in no-till fields compared to fields that are annually tilled and can provide considerable macropore paths to tiles.

Evidence of macropore flow to tile systems has been observed in two tile drainage studies with concurrent surface water runoff and tile flow monitoring in a basin. The first example is a long-term, no-till system where surface runoff during nonfrozen soil conditions rarely occurred, unless the tile system was flowing near maximum capacity. 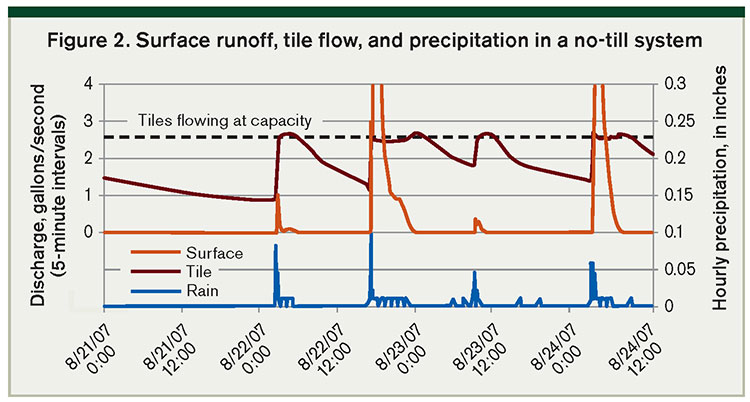 As shown in Figure 2, when a rain event occurred, there was often a rapid response in the tile system. This response was so rapid during intense rain events that tile flow was observed in less than 15 minutes from when the first raindrop fell.

The combined macropore pathways of structural porosity and earthworm burrows in this no-till system provided rapid transfer of water from the soil surface to the tile system. Surface runoff didn’t initiate until the tile system was flowing near maximum capacity (see dashed line in Figure 2). As tile flow began to subside below the maximum capacity, the surface runoff ceased.

In this no-till system, phosphorus loss to the tile system was predominately in the dissolved form (77%) and was similar to surface water chemistry, indicating a strong link between the soil surface and tile system. If the flow was greater through the soil matrix, lower dissolved phosphorus in the tile would be observed.

The second example is a conventional tillage system with macropore flow through a frozen soil. The winter of 2004 to 2005 was bitterly cold, with low snowfall through most of the winter. These factors drove frost deep into the soil. As snowmelt began in late March, there was still over 2 feet of frost in the soil.

When daytime temperatures began to rise above freezing (32°F) during the day and drop below freezing at night, flow was observed in the tile 24 to 48 hours prior to enough snowmelt water accumulating to result in surface water runoff seen in Figure 3. It is hypothesized that ice plugs that form in the macropores melt with a combination of the warming soil surface and warmth from the heat coming up through the soil from the tile system. 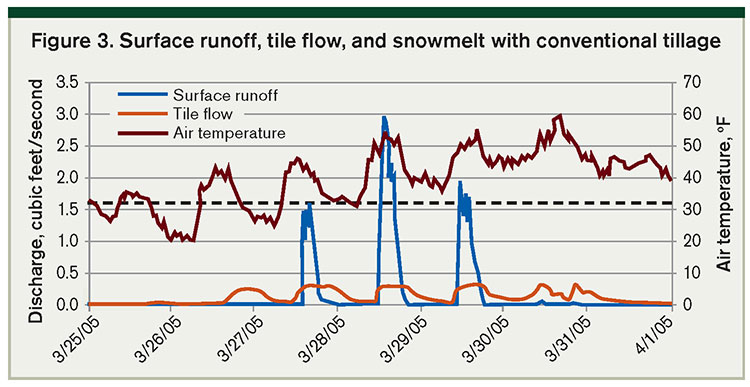 Macropore flow to tile systems also happens by the daily cyclic heating of the soil and resulting tile flow, even when the soil matrix is frozen to a depth of over 2 feet. The chemical analysis of the water in both surface runoff and tile drainage were nearly identical for the monitored constituents. Both factors indicate a strong link between the soil surface and the tile, which are indicative of macropore flow.

More detailed information on understanding and managing tile drainage systems can be found at uwdiscoveryfarms.org or learningstore.extension.wisc.edu.

This article appeared in the May 2020 issue of Journal of Nutrient Management on pages 6 and 7.
Not a subscriber? Click to get the print magazine.
Low disturbance application has benefits Next