The management of phosphorus loss must account for the different forms and seasonal characteristics of the nutrient.

By Ryan Heiderman And   Eric Cooley

The authors are with the University of Wisconsin-Madison Division of Extension’s Discovery Farms program. For two decades, Discovery Farms has been monitoring runoff events around the state.

Mitigating phosphorus loss from cropland is often a balancing act, with numerous environmental and management factors interacting simultaneously. There are trade-offs when determining how to tackle this challenge.

Different forms of phosphorus exist within an agricultural system, each with characteristics that must be matched to an appropriate conservation practice or management strategy to effectively reduce losses. Phosphorus (P) can be in the organic or inorganic form, and it can either be dissolved in water or attached to soil particles in runoff.

The behaviors of these various forms should be considered when applying strategies aimed at reducing P loss to the environment. Scientists have long documented the links between harmful algal blooms and other water quality problems to phosphorus, but aquatic ecosystems are particularly sensitive to dissolved P.

It is well known that surface runoff will happen; the amount and timing of precipitation are uncontrollable, but what is contained in that runoff is controllable. Over the past 20 years, Discovery Farms Wisconsin has been actively monitoring runoff events on farms across the state. Analysis of data from over 127 site years and 2,184 runoff events has shown March to be the month when the most runoff occurs in Wisconsin, with more than double the average runoff amount of the next highest month. March is not, however, the month with the greatest soil loss. June, closely followed by May, loses far more soil than any other time of the year.

As such, March and June are the months with the highest P loss, but the type of P lost in these months is different. Similar proportions of the total annual P loss happen in January, February, and March at 39%, compared with May, June, and July at 45% (Figure 1). However, in the early months of the year, 71% of the P is in the dissolved form (moves with water), while in the middle of the year, 70% is of the particulate form (moves with soil). 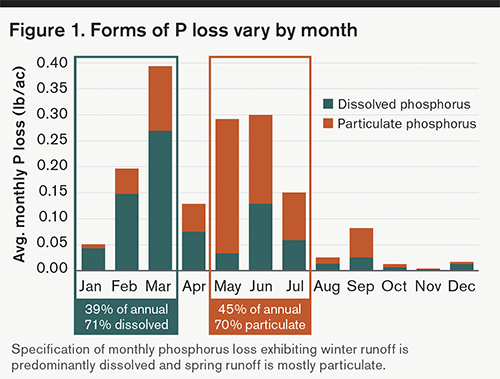 In late winter and spring, runoff is influenced by snowmelt and frozen soils, where the majority of the P loss in this runoff is in the dissolved form. Soils are often frozen and fieldwork is minimal, leaving soil particles in place, and thus, less particulate phosphorus is found during these runoff events. Come summer, when rainfall is often highest and the soil has thawed and been worked, particulate phosphorus attached to the soil particles is carried with the runoff.

The implementation of conservation practices should account for different forms and seasonal characteristics of P loss. While a practice may reduce one pathway of loss, it may potentially increase another. For example, conservation tillage and cover crops are an effective means of reducing soil runoff. However, over time, these practices have been shown to cause more stratification and accumulation of P in the upper soil layer, leading to greater water-soluble P, which leads to more dissolved P in runoff.

The Discovery Farms edge-of-field monitoring program has found similar results as other P studies, which demonstrate that the implementation of soil health or conservation practices has some potentially unintended consequences regarding P loss. Keeping the soil in place with minimal disturbance has many erosion control and soil health benefits, but these practices should be combined with P nutrient management strategies.

A balance must be made between placing nutrients below the soil surface but not with so much disturbance that soil loss becomes an issue. Injecting or banding fertilizers in combination with conservation tillage practices is one such strategy. Monitoring showed that incorporation of manure reduced dissolved P loss by 50% in no-till fields and pasture.

When P is surface applied, either as fertilizer or manure, there is the potential for an accumulation of P within the upper few inches of soil, in particular under no-till or conservation tillage. Stratification is a situation where excess P buildup occurs in the top few inches of soil, and an under supply of P develops deeper in the soil profile. Phosphorus stratification has the potential to both limit crop yields and lead to environmental concerns around runoff issues.

Discovery Farms data has shown a direct correlation between soil test P values in the upper inch of soil and dissolved P flow weighted mean concentrations in runoff (Figure 2). Surface soil testing (of the upper inch or two) and comparison to routine soils tests can identify if P stratification is present on your fields and the severity of stratification. Potential strategies to reduce the buildup and stratification of P involve trade-offs between keeping the soil in place and incorporating P deeper into the soil. 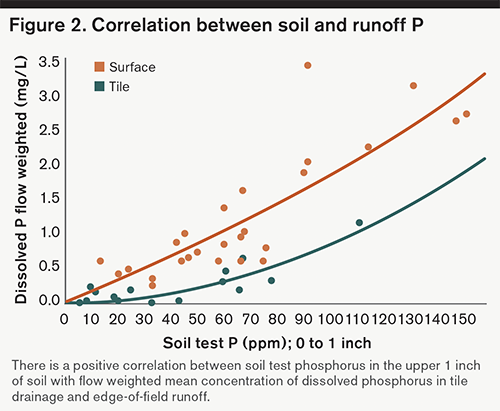 Modern agriculture has made great advances to reduce soil loss, but phosphorus loss continues to be an issue. It is important to utilize tools to target the specific challenges unique to each farming system. There are seasonal events to prepare for that are more or less predictable, in particular snowmelt and when soils may be frozen.

Anticipating when runoff is most likely to occur can guide fertilizer timing. Soil testing, at various depths, can determine if a P stratification situation needs to be alleviated with either reduced P inputs or incorporation deeper into the soil profile. Conservation practices that reduce erosion are shown to be highly effective at lowering soil loss during runoff events, but may potentially lead to higher soluble P losses and P stratification.

Utilizing all the tools available to closely monitor and time management strategies will help alleviate the water quality and other environmental concerns of P loss from agricultural systems while maximizing crop production.

This article appeared in the February 2022 issue of Journal of Nutrient Management on pages 6 and 7. Not a subscriber? Click to get the print magazine.