State of the art barns, solar energy, and smart litter handling are driving this poultry farm into the future 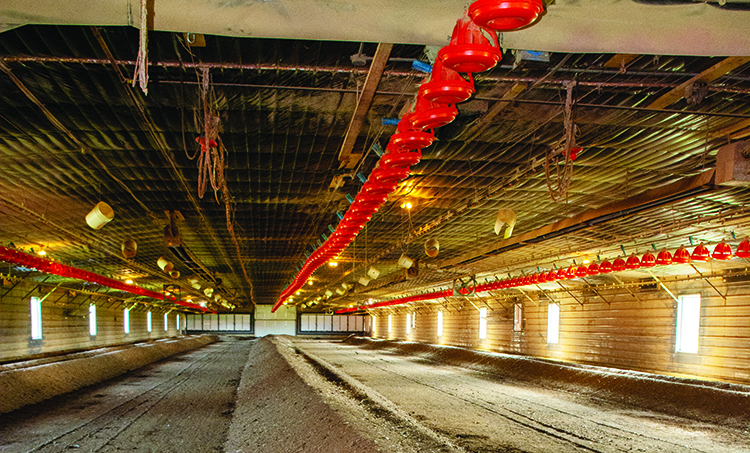 Litter and used manure are composted in windrows; some of it is used as bedding in the barns. The remainder is stacked in a manure shed and then land applied.

Mat Stutzman’s original career plan in public relations and sports media didn’t exactly include agriculture, but growth opportunities and technology drew him back to the farm he grew up on.

“I always enjoyed the business aspect of farming,” Mat said. “As technology became more prevalent in agriculture, that got my attention. The tech side played a major role for me.”

Mat’s grandfather moved to Constantine, Mich., in 1961 and started crop farming there. Mat’s parents, Albert and Sarah, followed suit, and until 2012, the Stutzmans were strictly grain farmers running 3,000 crop acres. At that point, Mat and his three siblings had all returned to the farm, and the ability to incorporate the third generation is what pushed them to diversify.

They considered other forms of livestock before partnering with Miller Poultry, a poultry processor headquartered in Goshen, Ind. Miller Poultry was looking to expand its business and needed more farms to raise birds, and the Stutzmans quickly became interested.

For the love of manure 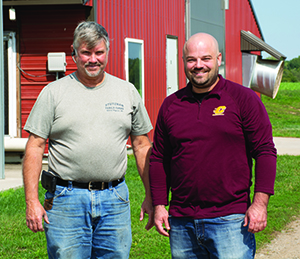 Albert and Mat Stutzman handle the day-to-day operations on their broiler farm, where they have up to 320,000 broilers on-site at one time.

They started out by building two broiler barns in 2013 to “dip our toe in the water and see what it was like,” Mat said. They quickly saw the benefits poultry manure provided their crop fields, along with the opportunity to provide more job opportunities on the farm.

In fact, poultry litter, not meat production, is really what pulled the Stutzmans to broiler raising. “We love the manure. That’s the reason we got into poultry,” Mat said. “Our number one goal was to produce manure for application.”

That interest in manure’s value started with Albert. When Albert took over the farm from his dad, he focused on nutrient management, started to plant cover crops, and instituted other environmental friendly farming practices. Albert also worked for a local dairy farm as a supervisor, and their anaerobic digester that generated power for the dairy intrigued him. “My dad was always interested in energy production,” Mat said. “We started looking at those concepts.”

While anaerobic digestion wasn’t a great fit for their farm, they quickly saw the litter provided tremendous value when land applied. “High-quality nutrients and everything you get from manure, that’s really why we expanded the poultry farm,” Mat said.

A year after their initial barns went up, they built two more, and then four more the year after that. Then, in 2017, Mat’s sister and her husband, Lynette and Tim Carpenter, built a four barn breeder egg facility. There they produce fertilized eggs that are picked up by Miller to be hatched at their facility. Last year, the Stutzmans built another breeder egg facility 1.5 miles from the home farm.

Mat’s brothers have since moved on from the operation, so today he farms with his sister, his brother-in-law (who manages the crop side of their farm), and his parents. Albert’s interest level in renewable energy remained high, so they continued to look for ways to advance the farm in that area. Although it appeared too cost prohibitive at first, the Stutzmans found the right contracts with the right people and some grants that allowed them to install 870 solar panels on their farm this year.

“It was still a large financial investment of ours,” explained Mat, “but we see two positive benefits. For one, our electrical bill by the end of this year should be down to $0, so there is a financial aspect to it. We are also cutting down on our electrical usage and producing energy in a way that is much more environmentally friendly.”

The solar panels will generate 425,000 kilowatt hours per year, or enough electricity to power 40 homes. All energy used in barns is being produced by the solar panels. Some of the harnessed energy is sold back to the power company; the rest is banked for use on the farm overnight or on nonproductive days when the panels are not capturing enough sunlight.

“It will be well down the road before we’ll see some financial return, but the reason behind the solar panels was that when people pull in to the farm, we want them to see the steps we are taking to be environmentally friendly in our farming practices,” Mat said, reaffirming their commitment to sustainability.

Powered by the sun, each of the broiler barns is 60 feet wide by 600 feet long and can house 40,000 birds. When at full capacity, the Stutzmans are raising 320,000 birds on-site at a time. Miller Poultry brings the chicks from their hatchery when they are one day old, and the Stutzmans raise the birds for about 41 days, or until they are 5.2 pounds. Miller formulates and delivers the feed for the broilers, which changes as they grow. The Stutzmans’ farm is not certified organic, but they do raise their broilers without the use of antibiotics.

A new requirement of the Global Animal Partnership (G.A.P.) standards, which farms growing for Miller Poultry abide by, is incorporating windows in all barns to allow natural light. “The sun is good for you,” Mat said. “We have seen nothing but health benefits from it, and we get a lot better yield out of the birds.”

They also maintain a very consistent environment inside the barns. In the winter, this includes running furnaces to provide heat. For summer, fans and cooling walls are used to bring the temperature down and ventilate the barns. The cooling walls contain a material like cardboard and have cold water running through them.

“We try to make the birds as comfortable as possible,” Mat said. “A happy chicken is a healthy chicken.”

To make sure birds get off to a good start, they lower the feed and water trays so the 1-day-old chicks can easily access them, and they use Christmas lights to attract chicks to the water. Water intake is something that they monitor very closely, because Mat said, “It is often the first indicator that something is wrong.” They also drop a curtain halfway through the barn for the first 11 days to keep the chicks closer to food and water and in a more secure environment.

They have added different enrichments to the barns to enhance animal well-being. This includes perches and buckets with both ends cut off to provide areas for privacy when birds want it.

Once a barn full of broilers has grown and left the farm, the barn is cleaned out. The goal is to have a 3-inch layer of bedding on the ground when a new group of birds is placed in the barn, so the Stutzmans remove compost as necessary to reach that point. Sometimes they use a piece of equipment called a housekeeper, which Mat likened to a potato digger. It shakes up the litter, removing larger wet chunks while leaving behind the drier used shavings.

The remaining used bedding and manure is pushed into windrows, and over the course of 14 days, the windrows are rolled two times to make sure the proper temperature of 140°F is maintained for composting. “That is key for antibiotic free,” Mat said. “Composting kills off the negative bacteria.”

Once composting is complete, the litter is leveled out and a layer of fresh shavings is placed on the top. Mat explained that for chicks, the litter is their immune system’s “lifeblood.” He said, “If they didn’t have bacteria that is in the used litter, the mortality rate would spike.” Not being able to use antibiotics can be a challenge, especially in the very young chicks. “Biosecurity is really, really big,” Mat said. “It is your main line of defense.”

The used litter and manure that is removed from the broiler houses is placed under an open-sided stack barn. Here the litter and manure are further composted until it’s used for land application. The Stutzmans test both the soil and the manure to make sure they are applying the correct amount on their fields, which they use to grow mostly seed corn and soybeans.

While they use some of the litter themselves, at this point, a majority is sold to other farms in the area. They have found a market and great demand for their product; the potato growers especially love it, Mat said. They currently have a waiting list for crop farmers wanting to purchase their composted manure.

The future of farming

While Mat’s four children are still young, some of his nieces and nephews are starting to show interest in joining the farm. The Stutzmans’ philosophy requires them to work somewhere else for two years before returning to the family business.

“Farming is so advanced now. The amount of business and tech involved, nutrient management, planning — it’s grown to such a high level,” Mat said. This requires more education, but it also creates more opportunities in different areas. And much of the thoughtful planning and practices the Stutzmans have put into place are in hopes that their farm can carry on for three more generations.

This includes the farm’s location, which they chose very carefully before building their first barns. With land spread over three counties, they selected this spot as there are no nearby neighbors. Using proper air control management, Mat said there are seldom odor issues anyway, but they remain committed to public perception and showing consumers what they do.

“We are genuine about what we do, how we care for our animals, and the way we care for the land,” Mat shared. “I think that’s very important for agriculture right now, finding ways to show our consumers and people not on a farm the positives we are doing.”

The Stutzmans feel their addition of solar power, which was the first installation on a Michigan poultry farm, was a prime example of how production agriculturalists can connect with consumers in a positive way. “We are really going the extra step to show we are looking at sustainability and looking for environmentally friendly ways to produce proteins, fruits, and vegetables,” Mat said.

“We take pride in what we do,” Albert added.

Their family remains committed to sustainable agriculture practices, mixed with technology that can help them raise healthier animals and grow better crops. For Mat, he is energized by the future potential of their farm.

A total of 870 solar panels harness energy from the sun, producing enough power to run the farm and sell some to the electric company.

This article appeared in the November 2020 issue of Journal of Nutrient Management on pages 11 to 13.

Answers at your fingertips Next

Mixing cover crops and manure Previous
Also in Journal of Nutrient Management
Worms do the dirty work
Proceed with caution: Contents may vary
Don’t settle for less
By Abby Bauer, Editor
Digesting their way
If manure spills, how will you respond?
Investing in the future
Farmers need to lead the charge
Worms do the dirty work
Change on the horizon