Worms do the dirty work

A Washington dairy turns manure into compost and usable water with the help of some little underground creatures. 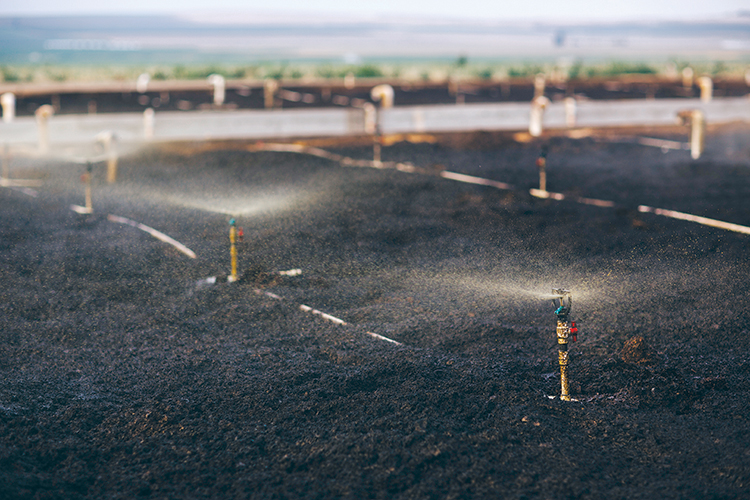 When looking for a way to reduce the amount of wastewater being trucked from his central Washington dairy, Austin Allred came upon a fairly simple solution: a worm-powered water treatment system.

Growing up on his family’s potato farm near Royal City, Wash., Allred worked on a local dairy during high school. In 2009, Allred and his dad, Jerry, partnered with the owners of that farm, Royal Dairy, and then purchased the farm from them in 2016. Today, Royal Dairy is home to 6,000 milking cows, a herd of mostly Jerseys. Freestall barns house about 60% of the herd, while the rest of the milking cows, dry cows, and heifers are kept on open lots.

The farm was designed so that all of the flush water from the freestall barns and vacuumed manure from the drylots ended up in a large storage basin, which would flow into an even larger settling lagoon. Allred said a pipeline system was in place for irrigation, but the water from the lagoon was too dirty to use effectively, causing the sprinklers to plug up often. They also didn’t have enough acres available to use all of the water through irrigation.

That meant the dairy was trucking millions of gallons of wastewater or “green water” out of the lagoon each year. Depending on nutrient test results, it would take an average of 4,000 acres to dispose of properly, and most of those acres were a distance from the dairy, Allred said.

Also, most of the water used to flush the freestall barns came out of the lagoon as well. Flushing with this dirty water had a negative impact on herd health and milk quality. Just a year after he purchased the dairy, Allred identified the need to do something different.

“Any dairy farmer that trucks green water can relate to where I was at,” he said in a presentation during the virtual Sustainable Agriculture Summit. “Having multiple trucks hauling water 5 or 6 months a year was not fun, and the liability connected to that is huge.”

Allred considered manure storage to be the biggest liability on the dairy, and that was a major consideration as he looked for a solution to meet his nutrient management needs.

He found the answer to his problem while attending World Ag Expo in Tulare, Calif. It was there where he first talked with BioFiltro, a wastewater filtration company, about their Biodynamic Aerobic (BIDA) System, which uses worms within a passive aerobic system to clean wastewater.

With some initial skepticism, he started out by installing a pilot project in 2017 that handled just 10,000 gallons of wastewater daily. Allred said he played around with that biofilter for a year and then installed a much larger system that could utilize more of the dairy’s water per day. The exception was the flush water, which was still coming out of their green water storage. Happy with the results, in 2020 he finalized the system, which can now handle 750,000 gallons of green water per day, most of which is recycled and reused multiple times.

Where the worms live

Today, the dairy’s manure first goes through solid separation. The separated solids are composted and then land applied or used as bedding.

The green water is destined for the BIDA System, which is located on a 10-acre footprint next to the farm’s manure lagoons. It travels through a pipeline

by gravity or with pump assistance when needed.

The wastewater is irrigated across the top of the concrete containment basins that are 5 feet deep. Each basin has drainage cells along the floor, a 1.5-foot layer of crushed rock, and a layer of wood chips on top. It is within this wood chip layer that the dirty work takes place, and worms are key to getting the job done.

As the worms burrow through the shavings, they make channels that help evenly distribute nutrients and water throughout the system. Their guts are rich in the microbes needed to remove the contaminants in the water they digest. Each worm excretes 10 pounds of castings each year, which maintains the microbial activity of the system.

The waste, or vermicastings, are also a highly beneficial soil amendment that is sought after as a fertilizer. Every year and a half, the shavings layer and vermicastings from Royal Dairy’s system are removed and sold to nurseries. An estimated 4.5 cubic yards of castings are generated per cow per year.

It takes just four hours from when the water enters the system for it to seep through the worms and microbe media and then head out of the containment basins through exit pipes as an irrigatable tea water that can also be used to flush the barns. The ability to clean the water so quickly also reduces odors that develop when manure and wastewater sit untreated in a lagoon.

Allred said the system runs effectively all year long, with just a few changes needed when it is really cold out to assure the water pipes don’t freeze.

As for the worms, Allred said they are very self-sufficient. They simply need to be fed with the green water. Each worm has a lifespan of about six years, and Allred noted that the worms reproduce very fast, so each worm may add 400 to 600 worms to the workforce each year. The only time new worms need to be added is when the shavings and vermicompost layer is removed and replaced. 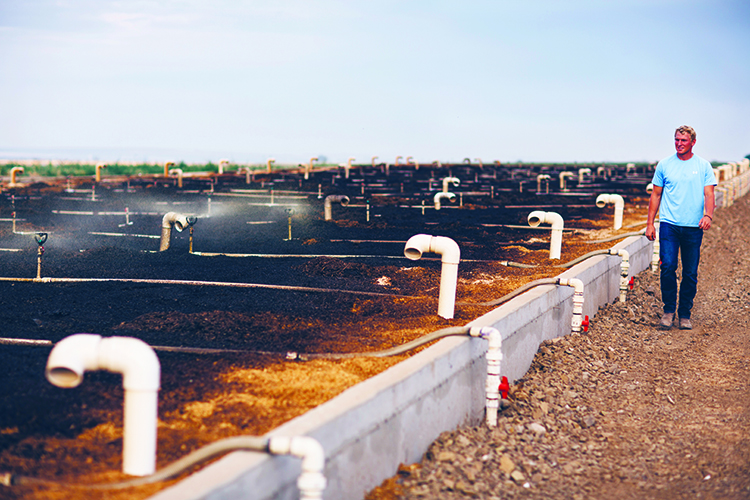 Royal Dairy is one of just a handful of farms currently using this biofilter system. Since it began operating, Allred has achieved an 89% lifetime removal average of total suspended solids, total nitrogen, total volatile solids, and total phosphorus. Further value may come in the form of selling carbon credits, which the farm recently became verified to do.

Allred has deemed two main benefits of using the BIDA system. The first is that they are able to flush their barns with the cleaner tea water, not green water like they used to. “This has been a big win for health of the animals and it improved our somatic cell count,” Allred said.

The second is that the dairy does not have to use trucks to haul away nearly as much green water. “That has been a huge victory,” said Allred.

The biofilter is also successful at removing 90% of the methane produced by manure. An uncovered lagoon can create 7 to 9 tons of methane per cow per year; through vermifiltration, the amount of methane per cow can be brought down to just 1 ton annually.

“I think as a farmer, good environmental stewardship is innately important to all of us,” said Allred. “We do the best we can, make improvements, and make sure we can always graduate to the next level of sustainability.”

For Royal Dairy, worms were the secret ingredient to turn their green water into cleaner water that can be used in several ways. With less methane being released and fewer trucks on the road, the environmental benefits go beyond the dairy’s borders, too.

This article appeared in the February 2021 issue of Management on pages 10 to 12.
Not a subscriber? Click to get the print magazine.

Organic matter is a measure of soil health Next

Powered by potential Previous
Also in Nutrient Management
Stay out of trouble
A behind the scenes look at cover crops
Fueling the biogas boom
By Abby Bauer, Editor
A story about sludge
Working in harmony
Words of wisdom
Committed to memory
Low disturbance application opens doors
Time to shine