At Robinway Dairy, the opportunities to recycle nutrients and water continue to grow. 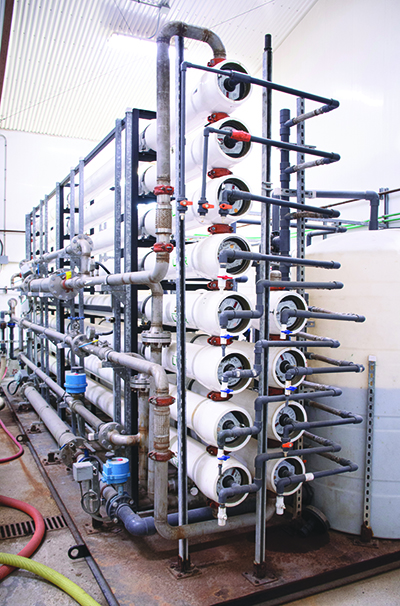 Manure from the cows at Robinway Dairy moves through a treatment system that creates concentrated nutrients and usable water.

When Jay Binversie was a freshman in high school, he traveled to California with his father to visit Maddox Dairy. That trip confirmed his desire to farm, but he wanted to do it on a larger scale than their current 200-cow operation located near Kiel, Wis. “I decided I wanted to manage people and manage a business,” he said.

Seven years later, Binversie graduated with a bachelor’s degree in dairy science from the University of Wisconsin-Madison, and he and his wife, Pam, immediately purchased the farm from his parents, Robert and Janet. “I knew what I wanted to do,” he said.

As was Binversie’s plan, he started to grow the herd and expand the farm. Some of the most recent additions came in 2014, when they built a new parlor, feed center, feed pad, and a cross-ventilated freestall barn. Currently, they have 1,760 cows in the milking herd and average 87 pounds of milk per cow per day. They also farm 1,750 acres of cropland. The Binversies do their own field work and planting, and then custom hire their harvesting and manure hauling.

Binversie is a partner with seven other dairies in a heifer rearing facility in Colorado. Right now, all their heifers are custom raised there; soon, calves will also make the trip West to be grown. That will leave more room on the home farm to expand the number of steers that can be raised. Right now, they feed out 700 steers annually to sell as farm-to-table beef.

As the farm grew, “sustainability became even more of a priority,” Binversie said.

While Binversie identified the switch to sand bedding in 2007 as his number one best investment, it is closely followed by the installation of their pivot irrigation system the next year. By improving the productivity of his crop fields, the return on investment for the irrigation system was just 2.5 years.

Another decision to make the farm more efficient and environmentally friendly came a few years later, when herd size reached a level that maxed out their current manure storage capacity. Binversie explained that adding another 10 million or 12 million-gallon lagoon would mean more surface area and more odor, and he wasn’t eager to go down that path. More manure stored on-farm would also require nutrients to be trucked farther to be field-applied, raising hauling costs and requiring the purchase of expensive land in a competitive market.

That led Binversie to install the state’s first Livestock Water Recycling (LWR) manure treatment system in 2015. He said the system extracts up to 70% of the water from manure while concentrating and segregating the nutrients.

Prior to entering the system, manure is cleared from the freestall barns using a flush system. Manure then travels to the treatment building, where the solids are mechanically removed. The first wave of the system removes 95% of the phosphorus from their manure.

Binversie explained that these solids, which are obviously high in phosphorus, can be trucked to fields farther away from the farm that are in greater need of the nutrient. One load of the micro material is equivalent to 10 loads of manure and reduces the number of trucks that must travel on the country roads each fall.

Dairyman Jay Binversie made investments to minimize the amount of manure stored on farm and make better use of his nutrients and water.

From June to mid-September, Binversie stores the remaining liquid manure portion in an old slurry store and is able to irrigate that liquid, which contains nitrogen, potassium, ammonia, and other micronutrients, on his crop fields. This adds even more value to the irrigation system investment.

He found that they could apply this nutrient-filled liquid on corn once a week from when it is knee high until it tassels, resulting in a 3- to 5-ton yield bump per acre. In addition, the risk of leaching is eliminated since the product is distributed in small amounts. “We found agronomic advantages we weren’t expecting,” he said.

During the remainder of the year, the removed liquid portion of the manure continues on through the complete treatment process. First, it travels through screens to remove the fine solids, and then goes through further filtration and purification with the use of polymers and reverse osmosis. Finally, the dissolved solids are removed, creating a concentrated nutrient product containing potassium and ammonia and clean, reusable water.

Binversie uses this recycled water on the dairy in many ways, such as cleaning equipment, washing the milking parlor floors, mixing footbath solutions, filling the polymer tanks for the treatment system, and more. The farm has been using recycled sand for bedding for more than a decade, and now they use this water to wash the sand, too.

The piece of equipment that has given the farm its fastest payback was the bedding dryer Binversie installed 2.5 years ago. Binversie said this addition dropped their somatic cell count from 200,000 to 125,000 somatic cells per milliliter and paid for itself in just one year.

Binversie also uses the dryer to remove moisture from the micro product, condensing its volume even further. The dried sand and dried micro are stored in an old feed bunker until used.

By recycling the water found in manure, Binversie creates an estimated 16 million gallons of clean water a year. That is 16 million gallons of water that doesn’t need to be drawn from the well, and nearly 3,000 fewer truckloads of manure that need to be hauled. “It’s very environmentally friendly,” Binversie said. “That’s the best part of the story.”

The opportunity to improve the environment and give farming a good reputation guided him to the manure treatment system, but it also opened another door for Binversie. A chat with a friend one evening led to an idea that spurred a side business, and Bucky Organics was born.

Using the nutrients removed from the manure, they created an organic fertilizer product that can be used in nurseries, by gardeners, and by other farmers. In the company’s third year, Binversie sells both dried fertilizer and bottled liquid concentrate in gallon containers and larger totes. They also sell a hand sanitizer product.

Binversie said their products are shipped all over the country, and they have become very popular with hemp farmers as an organic nutrient source.

“It’s not the main reason we put in the manure treatment system,” Binversie said, “but it has been a fun thing.” He sees more growth opportunities for Bucky Organics and is eager to build upon this part of his operation. 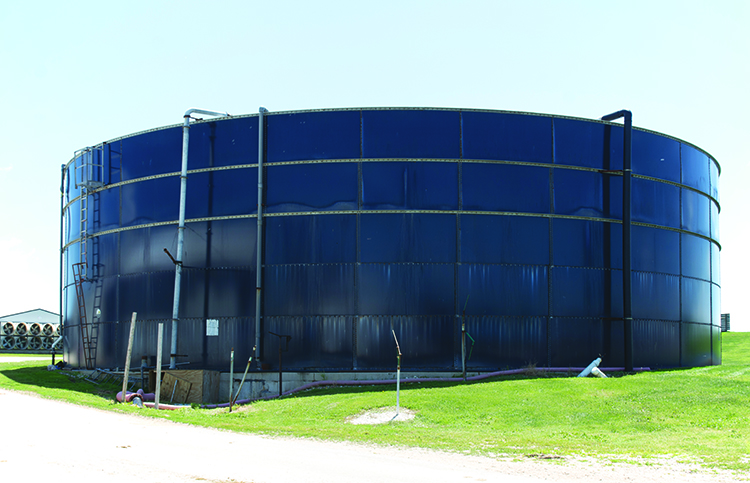 Some of the recycled water is stored prior to being irrigated onto growing crops.

Opportunity in the future

Binversie is the general manager of Robinway Dairy, and his wife, Pam, does the bookwork and landscaping for the farm. They have a solid team of managers, including someone who oversees manure separation and water recycling on the farm.

Longevity is important to Binversie, and eight of their 28 employees have been with the farm for more than 12 years. He looks for people with positive attitudes, he said, because that helps create positivity all around the farm.

What does the future look like for Robinway Dairy? Binversie isn’t sure yet. He and his wife have three daughters who are all pursing careers off of the farm, but maybe that will change someday. Or, perhaps Binversie will bring in another partner.

For now, Binversie is excited to find more ways to recycle nutrients on the farm, maintain positive neighborhood relationships, and grow the Bucky Organics business. “There’s a lot of opportunity here,” he said.