Is seaweed a viable enteric methane mitigation option for the dairy industry?

By A.N. Hristov
The author is a professor of dairy nutrition at Penn State University. 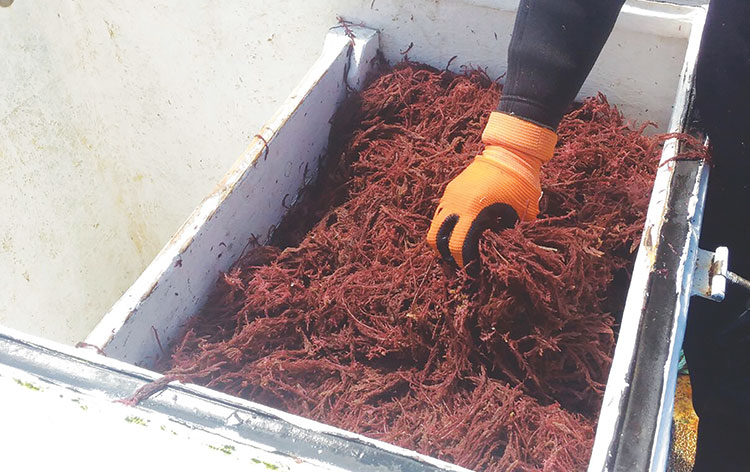 Popular media has created a buzz around feeding seaweed to ruminants in order to cut down their enteric methane emissions. Curbing methane release to the atmosphere (whether from oil and gas or livestock) is important, and the animal science community and livestock and feed industries are working hard on finding effective and economically feasible mitigation technologies with some real successes in recent years.

The dairy nutrition group at Penn State started investigating seaweeds as feed additives about two years ago, supported by federal and private organization grants. Our efforts have been directed toward in vitro screening of a large number of temperate and tropical seaweed species for their methane mitigation potential. We are also investigating dairy cattle responses to Asparagopsis taxiformis, a red seaweed shown to have a large inhibitory effect on enteric methane emission in sheep, and more recently, beef cattle by Australian researchers.

A closer look at seaweed

The in vitro work is ongoing and was reported at the 2019 Northeast American Dairy Science Association (ADSA) meeting, and another abstract was presented this summer at the 2020 ADSA meeting. This article will be focused on the A. taxiformis work.

Asparagopsis taxiformis is a macro alga found in tropical and warm temperate waters. The species deposits compounds called bromoforms which, along with other halogenated compounds (chloroform and bromochloromethane), have been shown to have potent methane mitigation properties.

The mode of action of this class of compounds is thought to be through inhibition of the methanogenic pathway at the final step of methane formation. The methane inhibition effect of A. taxiformis has been demonstrated in several in vitro experiments, and more recently, in experiments with live animals. The halogens are known to cause ozone depletion and are banned in many countries around the world. These compounds are also suspected to be carcinogenic.

Preliminary in vitro data at Penn State showed that A. taxiformis reduces methane formation by 95% at a 1% inclusion rate (on a dry matter basis). These in vitro experiments were followed by several experiments (two completed and one ongoing) with lactating dairy cows. A. taxiformis was fed at 0.25% up to 0.75% of the cows’ daily dry matter intake.

In the first study, aimed at determining the optimal dose of A. taxiformis, we saw a sharp drop in feed intake at a 0.75% inclusion rate and decided to not investigate higher doses. The mechanism of the negative effect of A. taxiformis on feed intake is unclear but is likely related to palatability issues.

In our second experiment, which was around four months in duration, A. taxiformis at a 0.50% inclusion lowered daily methane emission and emission yield on average by 34% and 29%, respectively, but the mitigation effect clearly diminished over time. In the first two months of the experiment, methane yield fell by 57% and 53%, respectively, but there was no reduction in months three and four.

Over the entire experiment, the 0.50% A. taxiformis inclusion level dropped dry matter intake and milk yield of the cows by 7% and 6% (88 versus 83 pounds per day), respectively. Milkfat and true protein were not affected, but lactose concentration declined.

What we observed clearly suggested that the active compounds in A. taxiformis — such as the bromoforms — are unstable. Their concentration declines over time, even as the freeze-dried seaweed was refrigerated and stored in the dark. The breakdown of the halogenated compounds was confirmed in a parallel study where we saw a 4- to 5-fold drop in bromoform concentration in A. taxiformis over five months of storage.

Thus, there is little doubt that A. taxiformis is a potent enteric methane mitigation tool. However, stability of the active compounds, at least in our experience, presents a significant practical challenge when it comes to normal livestock feeding practices.

Apart from practicality of routine feeding of seaweed to dairy cattle (or any livestock), other questions need to be addressed before this practice can be recommended. At this point, there are no published long-term studies with dairy cows to allow evaluation of the effects of A. taxiformis on animal health and reproduction. The longest study so far was a 90-day experiment with beef cattle in Australia. Another important point with all feed additives that can be addressed only in long-term experiments is adaptation of the rumen ecosystem, which can cause a reduction in efficacy over time.

Milk quality is another serious issue that may be a “deal-breaker” for A. taxiformis. In our second experiment, we saw a large increase in iodine and bromide concentrations in milk.

Then, there is the question of where all this seaweed is going to come from. It must come from aquaculture production because wild harvest of so much seaweed would certainly create an ecological problem. Although there are some successful startups, large-scale farming of A. taxiformis is far from certain or possible.

Reliable statistics on current U.S. seaweed production are lacking, but according to some sources, the annual wild seaweed (all species) harvest is around 720 tons (dry weight) and aquaculture production, which is rapidly growing, is probably twice as much. If combined, domestic production of all seaweed will still only be about 0.6% to perhaps 1% of the 360,000 tons (dry weight) needed if all 9 million dairy cows in the U.S. were to be fed 0.50% seaweed. Many questions need to be answered before we can determine if seaweed is a viable option for methane mitigation.

This article appeared in the August 2020 issue of Journal of Nutrient Management on pages 22 and 23.
Not a subscriber? Click to get the print magazine.

The secrets of sludge Next

Capturing more from manure Previous
Also in Journal of Nutrient Management
Worms do the dirty work
Proceed with caution: Contents may vary
Don’t settle for less