Where is biogas heading?

The Biden administration has made climate change mitigation a priority, and digesters are part of the equation. 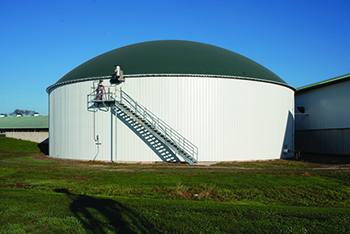 With climate change mitigation on the minds of many government leaders, farms will be part of the solution in the coming years, with an emphasis placed on the use of anaerobic digesters.

The author is an attorney based in Des Plaines, Ill.

U.S. agriculture faces what could be a pivotal moment for biogas and methane digesters with the election of Joe Biden as president and the appointment and confirmation of Tom Vilsack as secretary of agriculture. Prior to the election, when Biden was asked about regulation and agriculture, he responded with a description about how methane could be processed out of the manure. As the Biogas Council noted, it was not a technical answer, but he got the concept of the process.

Generally, U.S. presidents don’t mention this topic. Combined with that knowledge is his appointment of Secretary Vilsack, who supported greater use of digester technology during his time working for the Obama administration. It would seem there will be a clear agreement moving forward on the benefits of anaerobic digesters as well as other green initiatives such as carbon credits and cover crops.

Signs of the times

Several big policy directives give very clear signposts to the directions that the Biden administration will proceed. First, there was a presidential directive making the U.S. part of the Paris Agreement again. Second, there was Biden’s executive order titled “Tackling the Climate Crisis at Home and Abroad.” Third, there was the executive order to establish the President’s Council of Advisors on Science and Technology (PCAST).

The Paris Agreement is a “big picture” document that sets very high level targets for countries. It does not assign specific requirements for the farm sectors of the countries that sign it. However, it does call for a country to determine what contribution it can make to lowering global temperatures. This requires countries to “pursue domestic mitigation measures.” The Biden administration will look to the farm sectors to help achieve these domestic mitigation measures.

President Biden signed a very broad climate change executive order covering a wide range of topics, from international agreements to a Civilian Climate Conservation Corps to the federal government buying sustainable products. One of the key points, as noted above, is the president directing his administration to set a nationally determined contribution under the Paris Agreement.

As part of the efforts to cope with climate change, the administration identified possible contributions from the agricultural sector. Biden said, “America’s farmers, ranchers, and forest landowners have an important role to play in combating the climate crisis and reducing greenhouse gas emissions by sequestering carbon in soils, grasses, trees, and other vegetation and sourcing sustainable bioproducts and fuels.” Livestock operations that adopt and use methane digesters would presumably be part of that contribution by the farm sector.

In addition, the executive order calls upon the secretary of agriculture to take specific steps to get input from farmers and ranchers and other stakeholders on how the Department of Agriculture can encourage voluntary adoption of climate smart agricultural practices. These practices would result in additional carbon reduction and sequestration and source sustainable bioproducts and fuels. It would seem that the fuel and other by-products anaerobic digesters produce would fit within sustainable bioproducts and fuels.

As part of the executive order, President Biden reaffirmed that the U.S. government will follow scientific thinking on climate change. This order calls for using scientific knowledge on climate, including research, systematic observation of the climate system, and early warning systems. This commitment to science-based policy also appears in the executive order on the President’s Council of Advisors on Science and Technology. The discussions of this group will shape policy, and policy will shape action. A key indicator to watch will be whom gets appointed to this council.

There are several proposals on how support for methane digesters might be accomplished. The Climate 21 Project calls for methane generators to enhance electric use from digesters, and it points to USDA’s Rural Development program to promote methane digesters. USDA, it suggests, should target the livestock industry and provide budget resources to help farmers install digesters.

Time and political developments will determine specifics of how the administration will go forward. As has been noted, the best predictor of what people will do in the future is what they have done in the past. In 2009, under the Obama administration, Vilsack signed a memorandum of understanding with the dairy industry.

According to USDA, they agreed that “USDA and U.S. dairy producers will work together to reach a 25% reduction in greenhouse gas emissions by the year 2020. USDA will do so by undertaking research initiatives, allowing implementation flexibility, and enhancing marketing efforts of anaerobic digesters to dairy producers.”

It seems very likely that in some ways, the future will resemble the past, but with more money and urgency. There are voices calling for more vigorous action for small farms, and it is reasonable to assume people will also be asking for more action on environmental topics, including methane and water issues. It seems likely the Biden administration will have to respond with more money and sooner rather than later.

This article appeared in the May 2021 issue of Journal of Nutrient Management on page 8-9.