Clear the air with zeolites

Modern dairy production concentrates the number of animals housed in relatively small areas to improve production efficiencies, output per animal, and take advantage of economies of scale. This concentration of animals, greater feed inputs, and intensive management also concentrates by-products like manure and increases some air emissions, including ammonia and odors, which are among the most noticeable at the local and regional levels. 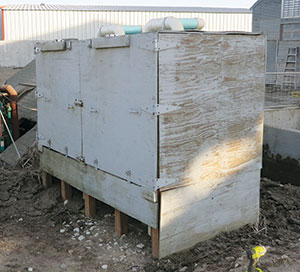 A pilot zeolite filter connected to a covered pit receiving waste water from a flush system cut ammonia emissions.
Diverse emissions reduction and control techniques are needed and can be applied at several stages of livestock production. In general, there is no single practice or process that can take care of all emissions from a livestock facility. Producers need a palette of options to choose from, based on their individual production conditions, geographical location, climate, management styles, needs on emissions reduction outcomes, and many other unique parameters.

One technology that can be added to the palette of options now is zeolite filtration. Zeolites are a group of minerals that are the result of volcanic eruptions millions of years ago. They are widely available around the world, and we have several mines in the U.S., including some in Idaho.

Some of their characteristics include a relatively low density, high porosity, high water retention, high cation exchange capacity (CEC), and the capacity of adsorbing a diverse variety of compounds, cations, and gases that can be exchanged depending on their charge, molecular size, and concentration. The most common and abundant zeolite is called clinoptilolite, and it has a wide variety of uses in water purification, agriculture, and industry.

The University of Idaho teamed up with a dairy producer in southern Idaho to test a pilot zeolite filter connected to a covered pit receiving the wastewater from a flush system. The liquid manure in the pit is the most concentrated one in the system. From the pit, the manure was pumped to a set of solid separators and then a centrifuge.

Air from the receiving manure pit was extracted using a fan connected to a variable frequency drive actuated by floats, varying the fan speed according to the flow of liquid and subsequent air displacement. Ducts diverted the air to the zeolite filter. The pilot filter had a top to bottom flow, and it can be set up with different volumes of media, from one or two small layers up to a full bed. The media, in this case, was clinoptilolite.

Effective on the farm

Ammonia emissions were monitored for a series of running periods accumulating a total of approximately two months of running time with an off period to test ammonia diffusion in the system. On the first days of monitoring, the filter achieved a 92% ammonia reduction.

A second monitoring period was done after having the filter off for about two months to check for ammonia diffusion within the filter and performance at different temperatures. Ammonia reduction was 90% on this second run, suggesting no gas diffusion when the filter fan is not operating. At this second run, the odor concentration was also measured, achieving a 45% odor concentration reduction, even when using the blower at maximum speed, with a minimum residence time in the filter of approximately 0.9 seconds.

After the second sampling period, the filter was running continuously until Day 59 of operation, when it reached a 43% reduction in ammonia under colder temperatures. These results demonstrate the high effectiveness of the pilot filter, especially considering that it was handling the liquid manure flow from two dairies housing a total of 4,800 Holstein cows.

Using zeolite filters to reduce ammonia and odor emissions is a viable technology that can help livestock producers reduce their impact, retain valuable nitrogen in a manageable form, and improve community relationships. Filters using these principles and media can reduce emissions from manure collection and transfer pits, storage or treatment ponds, forced aerated composting operations, and any other setting where the airflow can be captured and ducted to the filter.

Zeolites are relatively low-cost and available in the western U.S. When saturated, they can be crushed and applied to agricultural soils where microbes and crops can extract the nitrogen held in them. It is also possible to regenerate the zeolites to be reused again. This option wasn’t studied in these trials, but other researchers have regenerated them up to a certain point.

Another advantage of the zeolite filter is that it can run independently of weather conditions. It doesn’t need moisture, and it runs under a wide range of temperatures. Of course, ammonia adsorption declines as temperature drops, as do ammonia emissions from manure. Winter operations will see a higher benefit on the odor reduction than from the ammonia control. A journal article describing the research was published at the Transactions of the ASABE.

The use of clinoptilolite as air emissions control technology for dairy and other livestock operations is another option available for our producers.

This article appeared in the November 2021 issue of Journal of Nutrient Management on pages 20 and 21.
Not a subscriber? Click to get the print magazine.

Manure management is not one size fits all Next

Proceed with caution: Contents may vary Previous
Also in Journal of Nutrient Management
Get the sample you need
Partners in progress
Find the right fit for your team