Our evaluation of the impact of cover crops on edge-of-field water quality showed several benefits.

By Aaron Wunderlin   And   Ryan Heiderman

The authors are with the University of Wisconsin-Madison Division of Extension’s Discovery Farms program. 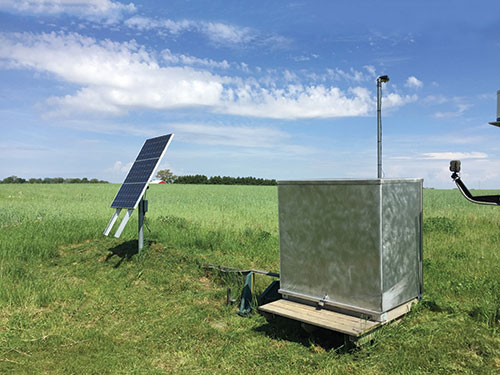 Monitoring sites were used to measure the impact cover crops had on runoff, soil loss, and nutrient losses.
For years, cover crops have been touted as a way to protect water quality among other benefits, such as soil health, a forage source, and carbon sequestration. One of the most important benefits directly affecting farmers is protecting their fields from topsoil and nutrient losses.

After the fall crop harvest, there may be little cover or residue left to protect from soil and nutrient loss until the next crop is established in spring. Without cover, soil and nutrients can be lost through runoff and erosion. Nitrate can also leach below the root zone. Establishing cover crops is a way to both protect the soil surface from loss and retain nutrients from leaching throughout the winter.

Discovery Farms recently completed a project focused on evaluating the impact of cover crops on surface water runoff quality. Two monitoring sites, RE1 (control basin) and RE5 (treatment basin), were installed on a farm in southern Wisconsin that utilized a paired watershed design with matching crop rotations.

Monitoring consisted of two phases: baseline and experimental. Each phase lasted one full crop rotation of corn, soybeans, and corn. From field year 2016 (FY16) through field year 2018 (FY18), the baseline phase monitored both basins under the same management and with no cover crops included in the rotation.

From FY19 through FY21, the experimental phase monitored both basins under the same management except that a cover crop (cereal rye) was incorporated into the plan at the treatment basin. The paired watershed design allowed us to determine if a relationship existed between sites and whether that relationship changed when management changed.

Cover crops were used between the harvest of one crop through the planting of another crop. Monitoring data was separated into events that happened during the growing season and events that happened during the period when cover crops were on the field. The data from this “cover crop season” was analyzed independently from the growing season to determine the impact cover crops had on runoff, soil loss, and nutrient losses.

Paired events during the baseline and experiment phases were plotted with each basin on its own axis (Figure 1). These bivariate graphs were analyzed to determine whether a relationship existed between the sites. 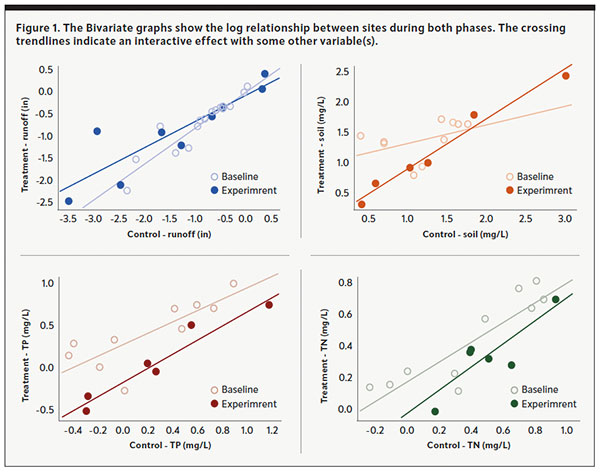 There were differences in runoff and losses between phases. The number of runoff events, runoff volume, soil loss, and nutrient loss were less in the experiment phase; however, this occurred at both sites. Precipitation and other factors would have influenced this change. After further analysis, it was statistically determined that there was a log relationship between the sites and that a difference in that relationship occurred between phases.

Hang on to nitrate

Additional cover crop benefits are exhibited through another recently completed tile monitoring project. In this project, bi-weekly grab samples were taken at 24 sites in Wisconsin from FY18 through FY20. Basic trend analysis was used to determine if cover crops had an impact on nitrate losses in tile drainage.

With fall as the reference point, average monthly concentration change over the “cover crop season” was plotted (Figure 2). Fields with cover crops were compared to those without. Cover cropped fields showed a trend of declining concentration through winter while concentrations in fields without cover crops remained relatively consistent. It was not until soils thawed that concentrations between the different systems increased and were similar. 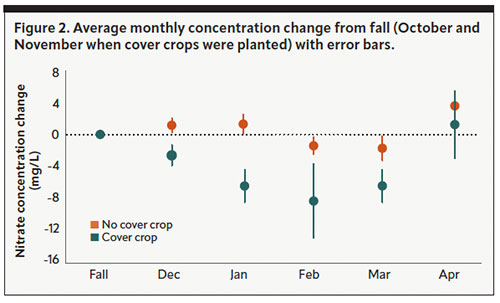 A piece of the puzzle

Both of these Discovery Farms projects supply data to support the concept that cover crops can reduce edge-of-field losses. However, using cover crops is only one practice that can be used to protect water quality. Combining cover crops with other strategies, such as practicing the Four R’s, reducing tillage, and diversifying crop rotation would provide a more effective approach for mitigating edge-of-field soil and nutrient losses.

This article appeared in the August 2022 issue of Journal of Nutrient Management on pages 6-8. Not a subscriber? Click to get the print magazine.

A behind the scenes look at cover crops Next