Bouncing between frozen and thawed

There is a connection between the freeze-thaw cycle and runoff risks.

By Aaron Wunderlin   And   Laura Paletta, University of Wisconsin 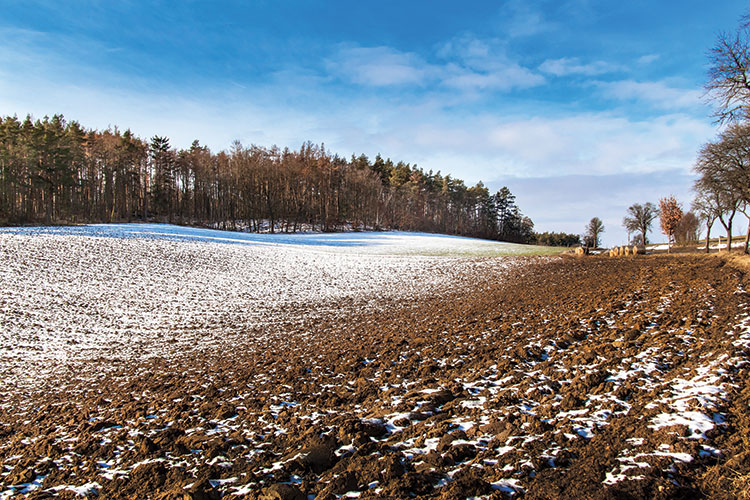 Over the years, the University of Wisconsin Division of Extension Discovery Farms Program has shared lessons learned from nutrient applications on frozen soil. The main takeaway is that applying nutrients, such as manure, to frozen ground shortly before runoff occurs leads to greater losses.

Frozen soils are more prone to runoff from rain and/or snowmelt events because it is much harder for water to infiltrate into the soil and percolate below the frost layer. Understanding how soils freeze and thaw provides insight on the development of soil conditions that are more susceptible to runoff and is important to consider when making decisions about nutrient applications.

The dynamics of how soils freeze and thaw throughout winter can strongly influence surface water runoff potential during snowmelt and early spring rains. The combination of physical and climatic variables in a local region can result in varying freeze dates, frost depths, and thaw dates.

The freeze-thaw cycle in a soil can vary based on several factors including:

As observed in Table 1 and 2, soil does not freeze and thaw at the same time each year, nor is the length of time when soil is frozen the same. Within and between years, the factors listed above can influence timing at any given location. 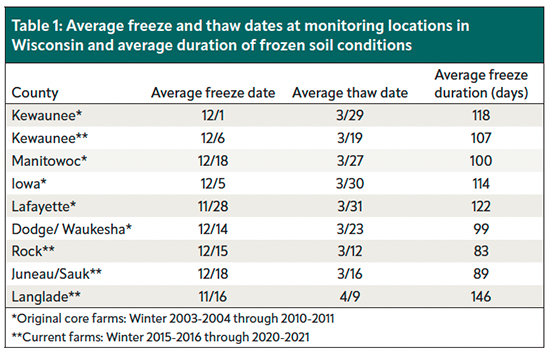 As hard as concrete

The amount and type of frost present in the soil is one of the primary factors that influence the amount of surface runoff generated by snowmelt or winter rain events in any given year. These conditions in the soil vary widely across the state and even in your local area. A challenge that develops with surface thawing while frost remains deeper in the soil profile is water can still infiltrate to fill pore space above the frost layer and then refreeze when temperatures drop again.

“Concrete frost” is commonly used to describe the condition when most of the pore space at or near the surface of the soil is occupied by frozen water (Figure 1). This condition is often formed in mid to late winter when snowmelt or rain infiltrate soil that is still frozen at some depth below. This cold water percolates down to where the frost still exists in the soil profile and then freezes.

In some situations, the upper profile of the soil becomes saturated with water to the soil surface before freezing. Concrete frost takes longer to thaw than regular frost in the soil; therefore, once it forms, it is typically present for the rest of winter until the entire frost is pushed out of the soil and water can percolate through.

The development of concrete frost has been verified in data collected by both Discovery Farms and others where melting occurs at the surface but the frost is not fully removed from the soil. In this situation, melt or rain water percolates to the frost layer then refreezes (Figure 2). These studies have also shown that during concrete frost conditions, little to no infiltration occurs in the soil as pore spaces are full of ice.

The in-field study conducted by Melanie Stock and collaborators at the University of Wisconsin also found that frozen soils create significantly greater amounts of runoff than unfrozen soils. This study applied liquid manure at different timings throughout the winter and saw higher runoff and nutrient losses in January compared to December. They attribute this to the presence of a thick layer of concrete frost (20.1 inches deep) that developed in January (Figure 2). 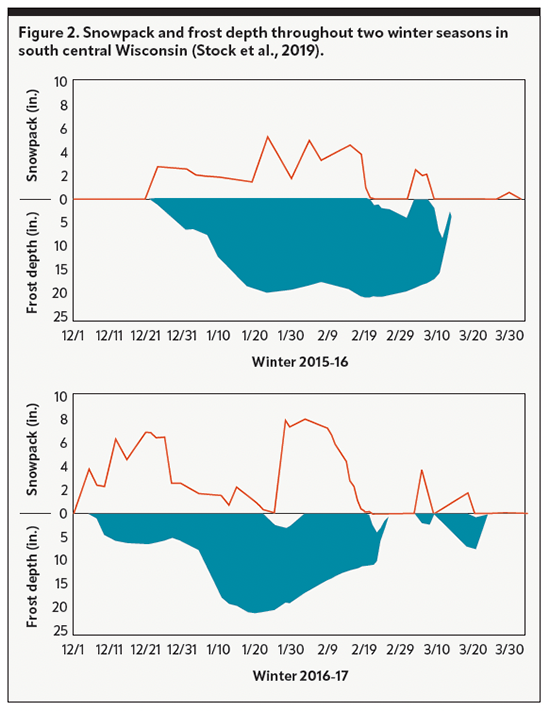 Stock also found that another important factor to consider when applying manure on snow is the effect of albedo, which is the reflection and absorption of sunlight. Manure is dark in color, which raises sunlight absorption. This speeds up snowmelt and can cause rapid runoff. In a case where snow starts to melt but concrete frost is still present, the newly melted snow cannot infiltrate the soil and becomes surface runoff.

During concrete frost conditions, utilize internally drained land (closed depressions) or low-sloped (flat) land, areas that are far from surface water features, and target those fields that have vegetative cover throughout the winter. Utilize your local conservation resources to assist you with your decision making when spreading manure this winter.

This article appeared in the November 2022 issue of Journal of Nutrient Management on pages 6-8. Not a subscriber? Click to get the print magazine.